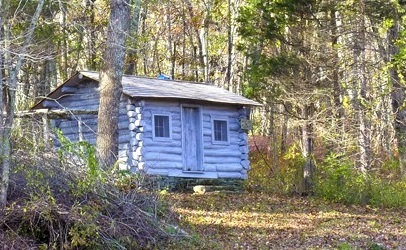 What’s interesting
Trail Wood is the former home of naturalist and Pulitzer prize-winning author Edwin Way Teale and his wife, Nellie. A resident caretaker lives in the Teales’ former house. Edwin’s study is open to the public by appointment. His writing cabin, across a pond from the house, Writing Cabin is available for day use by Connecticut Audubon members for $30 a day from mid-April to mid-November. Teale wrote about Trail Wood in A Naturalist Buys an Old Farm House, and also wrote about the nearby Connecticut woods in parts of books such as Wandering Through Winter.

A large beaver pond dominates the northern section of the property, which is bisected by an old wagon road now called Old Colonial Road. Connecticut Audubon is undertaking several habitats projects, including one near the house designed to restore that section of the sanctuary to its condition when the Teales lived there (they moved to the property in 1959; Edwin died in 1980 and Nellie in 1993).

Visitors can also see what happens as a forest regenerates. For several years culminating in 2017, gypsy moths damaged and then killed extensive areas of oak forest at Trail Wood. Foresters hauled out the dead trees over the winter of 2017-18. Since then, the forest has been regrowing, overseen by sanctuary manager Andy Rzeznikiewicz. 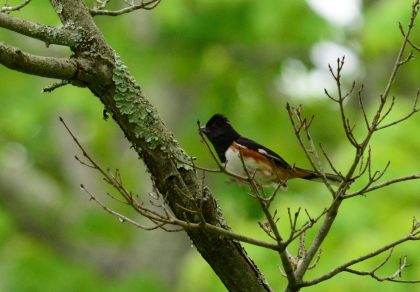 The forest is transforming into a habitat for the bird species that are declining fastest in New England – shrub and young-forest dwellers such as Blue-winged Warblers, Eastern Towhees, Chestnut-sided Warblers and Prairie Warblers.

Birds
As the Trail Wood habitat changes, the birds that nest there are likely to change as well. Look for forest-edge species such as Warbling Vireo, Yellow-throated Vireo, Least Flycatcher, and Orchard Oriole, plus shrubland/young forest birds such as Indigo Bunting, Eastern Towhee, and Chestbut-sided Warbler.

Cerulean Warblers have been seen and heard as well, and may be nesting at Trail Wood.

Hooded Warbler has been found on the south end of the sanctuary. Forest interior birds such as Scarlet Tanager, Eastern Wood-Pewee, and Great Crested Flycatcher can be found in nesting season as well.

Facilities
The unpaved parking area can accommodate 30 cars although it’s rarely that busy. There’s an old-fashioned outhouse near the parking lot — rustic but usable.

News and program information
For information about bird walks and other programs at Trail Wood, click here.