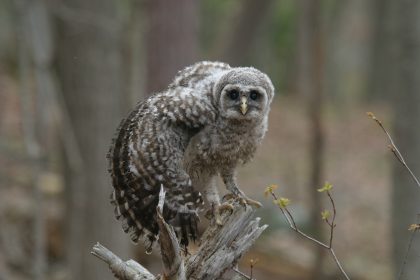 Deer Pond Farm participates in both the Connecticut Bird Atlas and the New York Bird Atlas.

The Connecticut Bird Atlas, a project of the Connecticut Department of Energy and Environmental Protection Wildlife Division and the University of Connecticut, relied on volunteers to collect data throughout the state during the nesting and non-nesting seasons. The objective was to document the distribution of all species of birds in the state during the 3-year project period that ran from 2018 to 2020. In March 2020, the decision was made to extend field data collection through February, 2022, to include the entirety of the 2021 breeding season. This updated perspective will be particularly interesting in comparison with the first breeding bird atlas – which was published in 1994 – as many species have ranges that have expanded or contracted in the past quarter-century.

The state is divided into several hundred “blocks,” smaller areas for focused data collection by volunteers. Deer Pond Farm is located in block 60D, which we have adopted as the lead for collecting observations and submitting data, although anyone is welcome to submit their own observations. Click here to see which species are breeding in block 60D.

The New York Breeding Bird Atlas III has 5,710 blocks in which data is being collected on the abundance and distribution of breeding birds. Deer Pond Farm is the principal atlaser for priority block Pawling-CE. This project relies on volunteers and will run from 2020 to 2024. At the end of the 2020 season, we had 32 documented species and confirmed breeding by 6. This is the third atlas project conducted for New York, and is sure to reveal interesting changes. Summaries of the first two atlas projects can be seen here.

eBird, a project of Cornell Lab of Ornithology, promotes citizen science by allowing birders to submit checklists of the bird species they see and hear. These checklists can then be shared with other birders, or even with projects like the Connecticut Bird Atlas. Several analytical tools are available to increase the value of this data, such as bar charts that show what birds to expect throughout the year in a specific location (for example, click here for a chart showing the species observed at Deer Pond Farm). Hotspots direct birders to public birding locations and allow multiple birders to submit data into the same location. At Deer Pond Farm, we have two hotspots: Deer Pond Farm, CT Audubon (Fairfield County), Sherman and Deer Pond Farm, CT Audubon (Dutchess Co.). Please enter your observations into these hotspots while you are at Deer Pond Farm. Thank you!

Select a month  below to view a list of the birds that can been seen at Deer Pond Farm: