A study of Old Lyme’s Tree Swallow roost by Cornell, UMass and others could revolutionize scientific understanding of the species 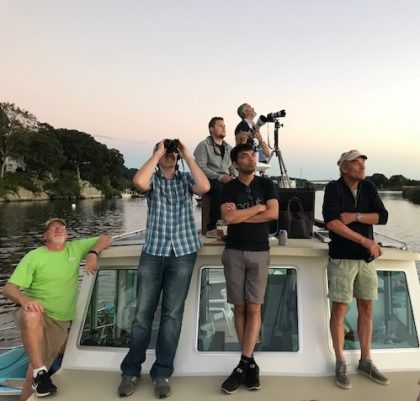 Professor Winkler’s team on the Connecticut River, waiting for the Tree Swallows to roost.

October 3, 2018 – As natural spectacles go, there might be nothing in Connecticut to match the roosting at dusk in late summer of Tree Swallows in Old Lyme.

On an evening and morning in mid-September, they conducted a reconnaissance and photographic imaging study of the Tree Swallows as they gathered to roost and then flew off for a day of foraging.

The goal is to establish the first complete quantification of a Tree Swallow roost based on an actual count of individual birds, according to David Winkler, professor of ornithology at Cornell University and a researcher on the project. 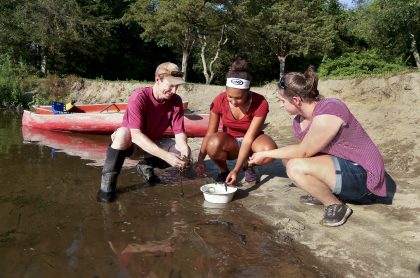 August 7, 2018 — The coves, inlets and backwaters of the Connecticut River estuary are among the region’s most important refuges for waterfowl during migration and through the winter. Dabbling ducks – Northern Pintail, Northern Shoveler, Mallard, Black Duck, Gadwall – gather there to find safe cover among the vegetation and to feast on the nutrient rich underwater grasses plants.

But in two of the estuary’s coves, the most important of those underwater plants is losing ground to another species that is far less valuable to wildlife. And in those coves and two others, vegetation changes are occurring that may have implications for wildlife and for people who use the area for kayaking, canoeing, fishing and hunting.

Two of the interns – Leila Kouakou and Haley Rivers – determined in 2017 that in Whalebone and Selden Coves in Lyme, waterweed (Elodea sp.) has replaced water celery (Vallisneria americana) as the dominant species of submerged aquatic vegetation.

This summer, Eva Schneiderman and Halee Mahoney are conducting fieldwork to see if the same change is taking place in Lord Cove, which straddles Lyme and Old Lyme.

While visitors are unlikely to notice the displacement of water celery by waterweed, it’s important because water celery is a favorite foraging food of waterfowl and is far more nutritious than waterweed.

“The quality of the habitat has diminished,” said Jim Arrigoni, a Connecticut Audubon conservation biologist who has been supervising the work. “It’s significant because the river is cleaner than it used to be, and yet here’s a change for the worse that we wouldn’t have known about without the data obtained by these hardworking women.” 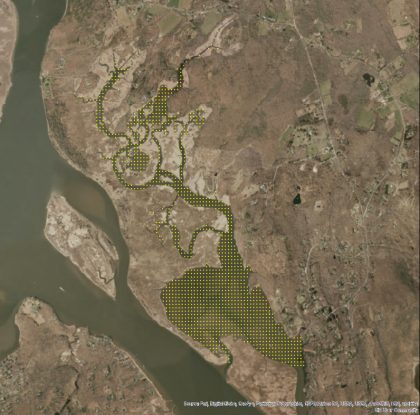 Aerial image of Lord Cove of the Connecticut River, including more than 1300 points to be sampled for submerged aquatic vegetation. Points are located at intersections of a 30×30 meter grid, and sampling entails quantifying the different SAV species within a 1×1 meter area. Interns use a handheld Geographic Position System to navigate to points, and a potato rake to collect plant samples.

The interns’ work has been supported by Lynk Foundation science research fellowships. It updates research conducted by University of Connecticut ecologist Juliana Barrett et al. for a 1997 Department of Environmental Protection study. Barrett’s report was titled “Distribution and Abundance of Submerged Aquatic Vegetation in the Lower, Tidal Connecticut River.”

Why the changes have happened is beyond the scope of the interns’ work. Connecticut Audubon will be making the findings known to state officials as well as other researchers and Connecticut River conservationists.

While the decline of water celery is the most significant finding, the interns documented a number of interesting and significant changes in 2017 and 2018.

In the 2018 field season, Schneiderman and Mahoney are conducting their research entirely in Lord Cove. They are surveying over 1,300 GPS data coordinates to determine how much of the open water area is covered by submerged water plants and how many species are present. They’re also preparing educational activities and a display about submerged aquatic vegetation in the Connecticut River Estuary for the Roger Tory Peterson Estuary Center.

Last year, Kouakou and Rivers documented one of the first occurrences of water chestnut (Trapa natans), a highly invasive species, in Whalebone Cove. Much more common upriver, water chestnut spreads prolifically, has little value for wildlife, and crowds out other more beneficial plants. It forms into vast mats of vegetation on the surface that boats can’t get through easily.

“These changes don’t just matter for the ducks,” Arrigoni said. “The lower Connecticut River is a world-class recreational resource that is enjoyed by thousands of boaters, anglers and hunters. It has immense economic value that would be severely undermined if water chestnut took hold.”

Coming Up At The Roger Tory Peterson Estuary Center