Connecticut State of the Birds 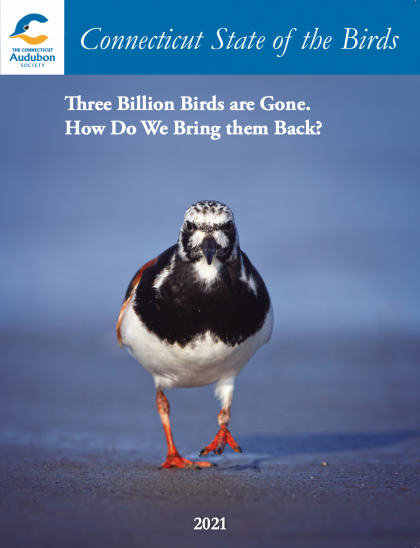 Connecticut State of the Birds 2021:

Three Billion Birds are Gone. How Do We Bring them Back?


It’s been two years since the journal Science published a peer-reviewed paper that showed the public for the first time what many birders sensed was true: there are far fewer birds in North America now than there used to be.

How do we bring them back?

In Connecticut, that conversation starts with Connecticut State of the Birds 2021.

[Publication date: December 2, 2021. Members received a copy in the mail. To get a PDF of the report, click HERE.]

“Today’s steep population declines,” writes Peter P. Marra, Ph.D., “are a clear indication that our existing conservation tools, including domestic laws and international treaties, are not sufficient to deal with present threats to birds and need to be wholly re-evaluated.”

But he adds, “Although the factors contributing to bird population declines remain elusive, we are making progress in pinpointing how to identify why, where and when the decline happens.”

His lead article in Connecticut State of the Birds is titled, “Reimagining Bird Conservation in the 21st Century.”

Little progress on bird conservation will happen without progress on climate. Connecticut State of the Birds 2021 features an article by Brooke Bateman, Ph.D., lead climate scientist for the National Audubon Society. Dr. Bateman was instrumental in National Audubon’s determination that climate change is the single biggest threat to birds.

Her article, titled “Birds Are Telling Us It’s Time to Act on Climate Change,” explains how the intersection of bird conservation and climate change mitigation can help Connecticut meet its carbon reduction goals.

Six national experts explain what they think are the most important things to do now to bring back birds. Those experts are Scott Weidensaul; Drew Lanham, Ph.D.; Leslie Carothers; Desiree Narango, Ph.D.; Morgan Tingley, Ph.D.; Arvind Panjabi; and Deborah Cramer.

Every member of the Connecticut Audubon Society receives a copy of the report each year. If you’re a member, look for yours in the mail around Thanksgiving.

If you are not a member, join now to make sure you get your copy.

Articles in Connecticut State of the Birds are written by the best ornithologists and conservationist in the state and the region.

Throughout the years authors have included: 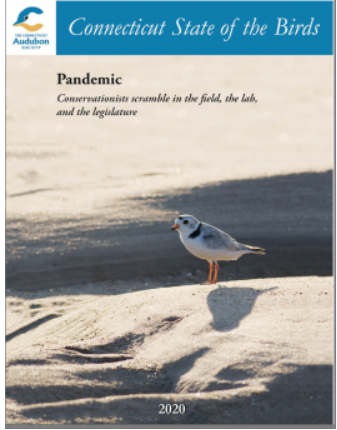 2020 Pandemic: Conservationists Scramble in the Field, the Lab, and the Legislature

2018 In Cities and Suburbs: A Fresh Look at How Birds Are Surviving in Connecticut

2017 The New Bird Atlas: A Call to Action for Connecticut’s Conservationists

2016 Gains, Losses and the Prospect of Extinction

2013 The Seventh Habitat and the Decline of Our Aerial Insectivores.

2012 Where Is the Next Generation of Conservationists Coming From?

2006 Conserving Birds and Their Habitats