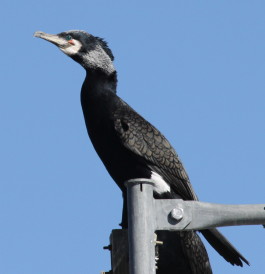 The Great Cormorant is the largest North American cormorant and is found on nearly all continents. In the States, it is restricted to the east coast, where it breeds on a just a few rocky island colonies in Maine. It is a regular winter visitor to Connecticut where it replaces the more commonly found summer resident, the Double-crested Cormorant.

What it looks like: A large, dark plumaged water bird, the Great Cormorant is relatively easy to identify with its long body and neck. Only Double-crested Cormorants will muddy the ID. Season is a help, but also rely on size and shape; larger and more robust. In breeding plumage, the white patch at the base of the bill will help as well as a prominent white patch on the flanks. Adults will also get a significant frosty appearance to their heads. The subspecies found in Australasian waters sports a crest.

With young birds, one may find it a bit more difficult to separate the two species without a close look, but look for a dirty-brown bird with a brown neck and whitish belly. Double-crested has a brown belly and whitish neck. Easy!

Where to find it: Part of the reason this species is so widespread is its ability to survive in both fresh and saltwater sources. A fish-eating bird, it is found in areas where prey is abundant, including coastal environments, estuaries, rivers, and lakes. A good place to look for Great Cormorant in Connecticut is at the mouths of harbors along Long Island Sound, and along larger rivers like the Connecticut. In the last week, this species has been seen and reported from the Connecticut River at Deep River and Lyme, from Merwin Point in Milford, and in the Thames River in Groton. If you don’t find the cormorant, you are likely to find other good birds including many duck species, grebes, loons, and more.

In the Thames River, check the New London side of the river where there are numerous small rock islands. Pay particular attention to the ID here, as there is a wintering population of Double-crested Cormorant in this river.

Biology: Cormorants are divers and pursue their prey beneath the surface. Unlike ducks, who have an oil gland to give their feathers buoyancy, cormorants do not want this buoyancy as they spend so much time underwater. As a result of un-oiled feathers, the feathers become waterlogged and the bird needs to come out of the water for a period to dry-off. You may have seen them perched with their wings spread in a Dracula-like fashion, drying the laundry.

Conservation: Populations were significantly reduced in the 19th century as a result of their being hunted by fishermen concerned with competition for fish, but numbers have increased since the early 20th century and now appear to be stable. This conflict with fishermen has not stopped, in some fisheries licenses for legal hunts are issued.

Read all of our Connecticut Audubon Bird Finders here.