Bird Finder for December 10: Greater Scaup, Lesser Scaup & how to tell the difference 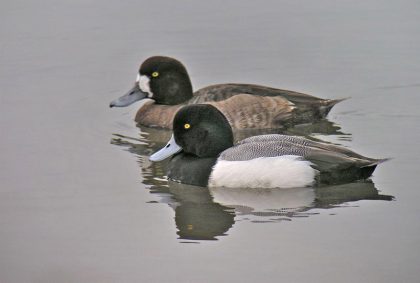 by Greg Hanisek, editor of The Connecticut Warbler
Where To Find Them: Both species can be found in saltwater and freshwater, although neither is numerous on freshwater in Connecticut.

On Long Island Sound, Greater Scaup form four- and rarely five-figure flocks on open water and in the larger harbors, mostly westward, from New Haven to Greenwich at places such as Sandy Point and the boat launch, both in West Haven; Penfield Reef in Fairfield, and the Black Rock section of Bridgeport.

The best places for Lesser Scaup are more protected. They include the Long Wharf section of New Haven Harbor and Captain’s Cove Marina in Bridgeport, where flocks usually top out in the low 3 figures. Any of these flocks can hold a few of the less numerous species.

When To Find Them: Both species migrate through Connecticut as well as spend the winter here. Prime time would be late October to late April, with highest numbers bracketed within those periods. A few, especially Greater Scaup, sometimes summer on Long Island Sound. 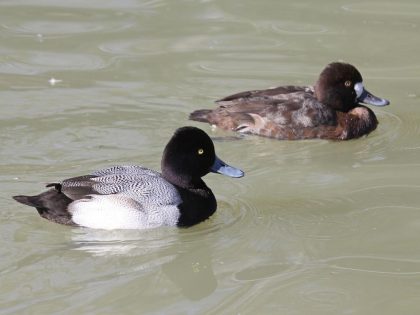 What They Look Like: Ah, here is the rub. These species are very similar and require patient scrutiny to separate them. The firmest character, the long white wing stripe on Greater and shorter stripe on Lesser, is usually concealed on swimming birds. The once-touted color of the head gloss has now been so widely dismissed that I won’t muddy the waters with further discussion.

Other plumage features are subtle enough that it’s best to concentrate on shape. Here are 4 points for study: 1) Overall size. 2) Bill size. 3) Head shape in profile. 4) Head shape from behind.

1) Not surprisingly, Greater is the bigger and especially the bulkier of the two. This of little use on lone birds, but side-by-side the Lesser is clearly the more delicate.

2) The size difference is reflected in the bills — slender in the Lesser and more formidable in the Greater. Again this works best in direct comparison.

3) When swimming in profile with relaxed posture (no stretching, slumping etc.), the Lesser Scaup has a distinct knot or knob at the rear of the crown, so that the highest point in the head is behind the eye. This knob is sometimes apparent when the Lesser’s head is tucked. The Greater has a more smoothly rounded head, sloping backwards so that the highest point (which isn’t very high) is just above or ahead of the eye. But it’s important to note that head shape can change markedly when the birds are active.

4) The rear view is very helpful, but it requires patience to get things lined up properly. Look for the spot where the head pinches in at the eyes. Then look at the area above the pinch. It’s narrower and higher on Lesser; lower and wider on Greater.

Conservation Status: Birds of North America Online says Lesser Scaup is one of the most abundant and widespread of North American ducks. Its core nesting habitats are in boreal forests and parklands from central Alaska through Manitoba, and numbers of this species breeding in the Prairie Pothole Region have increased over the past several decades. Breeders favor large seasonal and small semi-permanent wetlands and lakes with emergent vegetation.

BNAO says Greater Scaup is the only circumpolar Aythya, and one of few circumpolar duck species. Less is known about its biology than other North American Aythya, in part because of its relatively isolated breeding grounds but also because of difficulty distinguishing it from the Lesser Scaup. In North America, most Greater Scaup nest in coastal tundra of the Arctic and Subarctic, especially western Alaska. Threats are minimal in the breeding area but more troubling in some of the urban areas where they winter, including Long Island Sound.