Patrick Comins, a Leader in Conservation for Two Decades, is Named Executive Director of the Connecticut Audubon Society 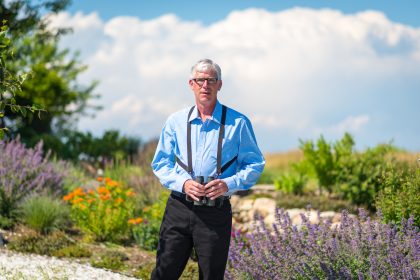 Fairfield, CT, June 28, 2017 – The Connecticut Audubon Society has named Patrick Comins, a leading authority on the conservation of the state’s birds and the habitats that support them, as its executive director, the organization’s Board of Directors announced today.

Comins will lead the organization as it focuses on inspiring an ever-greater spirit of conservation statewide, through its education programs, citizen science initiatives, and habitat improvement projects, and at its seven centers and 20 sanctuaries.

He will begin his new position on July 17, replacing Nelson North, who is retiring after 10 years as director of Fairfield operations and executive director.

“Our goal was to find an executive director with an impeccable record of success as a conservationist and a reputation for integrity and leadership throughout the state – and we are confident that we found him in Patrick Comins,” said Peter Kunkel, chairman of Connecticut Audubon’s Board of Directors.

“Our members and the conservation community at large can be assured that with Patrick leading the organization we will build on the record of success that started when Mabel Osgood Wright founded Connecticut Audubon 119 years ago.”

Comins said he would focus on working with the Board, and with the organization’s members, staff, and large network of grassroots volunteers, to continue Wright’s vision of inspiring people to conserve by connecting with the natural world.

The Connecticut Audubon Society is based in Fairfield, has a staff of approximately 30 employees in Milford, Old Lyme, Glastonbury, Pomfret, and Sherman, and at its EcoTravel program based in Essex. The organization’s award-winning Science in Nature outdoor education program teaches basic conservation science to almost 20,000 students a year. Its Osprey Nation program uses 200-plus volunteers to compile and analyze data on more than 300 active Osprey nests in the state.

“It is humbling to walk in the footsteps of Mabel Osgood Wright, one of the giants of the early bird conservation movement,” he said. “I intend to keep her original vision of ‘inspiring people to conserve nature’ as a key tenet as we refine a vision for 21st century conservation at the Connecticut Audubon Society.”

Comins is a graduate of Trinity College in Hartford and a resident of Meriden. He is a past president of the Connecticut Ornithological Association (COA) and was the 2007 recipient of its Mabel Osgood Wright Award and 2017 President’s Award. He has written several articles on bird conservation and identification for the COA’s quarterly journal, The Connecticut Warbler.

He has also been a regular contributor to Connecticut Audubon’s annual Connecticut State of the Birds report.

Important projects he has worked on include the protection of the former Griswold Airport property in Madison and the Preserve in Old Saybrook; additions to the Salt Meadow Unit of the Stewart B. McKinney National Wildlife Refuge and Menunketesuck Island in Westbrook; additions to the Barn Island Wildlife Management Area in Stonington; and the protection of the Guilford Sluice property and Salt Meadows Park in Guilford.

Comins said he would continue to work in cooperation with Audubon Connecticut on the Audubon Alliance for Coastal Waterbirds and other projects.

Audubon Connecticut Executive Director Stewart Hudson said, “On behalf of the staff and board of Audubon Connecticut and the National Audubon Society, we owe a big debt of gratitude to Patrick for the extraordinary accomplishments that he has led on behalf of birds, other wildlife, and people in our state.  There is not a part of Connecticut that has not been touched by his vision, compassion, bird knowledge, and hard work. We are disappointed that he is leaving, but heartened by the fact that he is not going far. The good news is that we can continue to work with Patrick on these issues in the years to come. We wish him the best in his new position.”