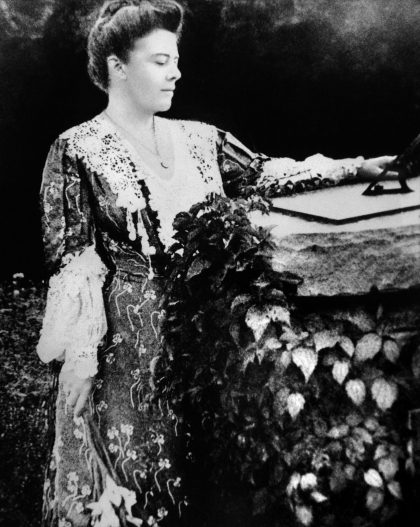 As far as we could tell, there were only four known photos of Mabel. Then a few months ago we found the key to a locked cabinet at our headquarters in Birdcraft. When we opened it, we found a fifth! It was not in great shape but a member of our Board of Directors, Jerid O’Connell, carefully restored it! We are publishing it here for the first time.


It’s impossible to understand Birdcraft without knowing something of its founder, Mabel Osgood Wright, and her great contributions to ornithology and conservation.

She had aspired to become a physician but respected her father’s advice: “If young women wish to be lawyers, preachers, physicians or merchants we would put no harsher obstacle before them than our honest opinion that such is not their providential career.” Or, in her own words: “I intended to go to Cornell to study medicine, but I married instead.” She married but turned her passion toward the conservation of birds, a lifelong commitment. In her first book, The Friendship of Nature: A New England Chronicle of Birds and Flowers (1894) she described the local Fairfield, Connecticut area flora and fauna in a series of essays which she enhanced with her own photographs. At the time people worshipped the grandeur of nature but Wright’s book was written to connect people intimately with the wonders of the environment in their own backyards. The book was reviewed favorably in The Auk (Scientific Journal of the American Ornithologists Union) and a number of other publications including the New York Times.

Wright’s scientific knowledge of birds came through her friendship with Joel Allen, Curator of the Museum of Natural History and Frank Chapman, his assistant. She studied with them in 1894-95 and in 1895 she published her second book, Birdcraft, which gave bird identification information for each bird, its song and habitat along with her personal observations of their behavioral characteristics. This inexpensive book filled a void for American birders and was praised by the likes of John Burroughs. It was reprinted nine times and served as the most popular bird guide until Roger Tory Peterson’s Field Guide to the Birds was published in 1934. In 1895 she followed with a bird book for children, Citizen Bird. She published many other books (27 in all) including a field guide to plants, Flowers and Ferns in Their Haunts (1901) and wrote innumerable articles on conservation issues throughout her life.

Wright became Associate Editor of Bird-Lore (later the official publication of the National Audubon Society), a bi-monthly publication founded in 1899 by Frank Chapman which was devoted to the study and protection of birds. She held this post for 11 years until 1910 and was then a contributing editor for the rest of her life. 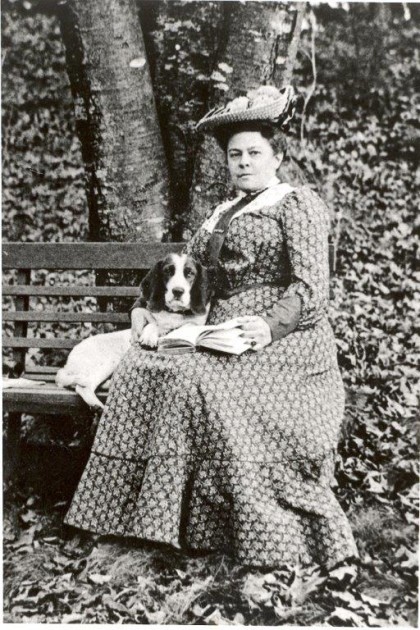 Bird-Lore gave Wright a platform to educate the public on conservation issues with her scientifically accurate and often humorous articles. In her first article she stated what may have been the first seeds of a dream for Birdcraft: “To introduce people to the bird in the bush is the way to create a public sentiment to keep it there…” She pushed a conservation legislative agenda, and after the laws were passed, she tirelessly lobbied for their enforcement. Becoming increasingly alarmed by the loss of bird habitat from cutting firewood and construction, one of her frequent topics was the need to set aside land for “songbird reservations.” She was successful in this effort on a local level when she founded Birdcraft with financial help from her birding friend, Annie Burr Jennings, an heir to a Standard Oil fortune.

Wright’s resolve to found a “songbird reservation” became action after she and some friends went to see a play called “Sanctuary; a Bird Masque” concerning a feather hunter who became a bird conservationist. The play was written to celebrate the opening of the Meriden, New Hampshire, Bird Sanctuary. Declaring, “Connecticut must have a sanctuary and you must make it,” Jennings gave her a free hand in the selection of property. Eventually two parcels were under consideration; a parcel of 100 acres located four miles from town and a ten acre parcel which was close to the center and a short walk from the train station. The smaller parcel won out. It had been a pasture but it had a number of bird friendly trees; pepperidge, wild cherry, oak, maple and cedar, and the slopes contained lots of berry bushes. Its location across the street from Mosswood (Wright’s home) and so near public transportation (better to accommodate visitors) were deciding factors.

As soon as title passed, they set to work. They constructed a “cat-proof fence” around the property, cut trails, planted bird friendly shrubs, built seats, observation shelters, bird baths, a caretaker’s cottage and other amenities. Stones from the property were gathered to make rustic gate posts containing nest holes, walls and a fireplace for a room in the cottage which was to serve as the place for the Connecticut Audubon Society to hold their meetings. They dredged out a pond which was fed by several springs and in early October the pond attracted a Black-bellied Plover, its first record. On October 16, 1914, Birdcraft Sanctuary was opened to the public.

Wright’s original plan was to have the sanctuary be a refuge for birds but also to serve an educational purpose, to allow the public in to observe them and to hold children’s classes. It became so popular with nearly 1,000 visitors in the first month, that the birds disappeared. The next meeting of the Board was a depressing affair. What to do? The public proved unschooled in the ways of bird watching. They rushed about in squads and the children were impatient, playing tag and hide and seek. This was the fall. What would spring be like when the birds were trying to nest? The Board of Governors decided to limit admission and require some sort of qualification for entry, but a different solution soon became evident.

People began bringing in dead birds that they found and wanted to learn about them. The caretaker they had hired, Frank Novak, was not only a gifted birder but also a taxidermist and he stuffed the donated specimens so they could be displayed. After a few weeks of seeing how eager the public was to learn from the mounted specimens it became clear that the best way to introduce people to the birds was to teach identification from the mounts.

They planned a one room museum, 25 x 16 feet, constructed in the same style as the cottage. The walls would have seasonal dioramas populated with the smaller birds that would be seen locally at each season of the year. Larger birds would be displayed on shelves over the dioramas. Again Annie Burr Jennings provided the funding. Work began in late November 1914. A talented board member painted the backgrounds for the dioramas, the accessories for the foregrounds were found objects from the area; portions of fences, small shrubs, etc. Frank Novak mounted the appropriate specimens in life-like poses and they were placed in the dioramas. They decided not to clutter the scenes with name labels and Frank Novak (who had come initially as a construction worker) was to become guide and curator, sharing his vast knowledge of birds, nesting strategies and food preferences.

The museum opened in March and was an instant success. By July 1, 1,300 people had visited, ranging in skill from professional ornithologists to eager school children. Wright also visited the schools and was a familiar sight lugging smaller versions of the dioramas, back and forth from the museum. Nesting was undisturbed as visitors viewed the birds from the museum or in carefully monitored groups with 52 nests discovered that first year.

The “cat proof fence” proved not to be so cat proof after all and Wright walked the trails daily in search of cats, accompaniesdby her spaniel, Lark. Frank Novak displayed yet another skill, as a marksman, and the cat population dwindled. Records show that 107 cats were taken in the first three years of its operation. The practice of the era was to remove “problem species” including not only invasives like House Sparrows but also such predatory birds as Cooper’s Hawks and Northern Shrikes. Such practices have long been discontinued and modern conservationists would be horrified.

Putting aside this unfortunate aspect of Birdcraft’s history, it became a nationwide model, described in Bird-Lore by Frank Chapman as “an object lesson in conservation and museum methods…Ten acres cannot harbor many birds nor a little museum in the country be seen by a large number of people, but the idea which they embody can reach to the ends of the earth.” Visitors came from all over the country to examine this educational model. It became the inspiration for the Theodore Roosevelt Memorial Sanctuary in Oyster Bay after a visit by his widow, seeking a fitting memorial.

Wright died in 1934, but the educational programs continued, the little sanctuary next to the railroad tracks inspiring generations of birders with its intimate displays of the birds of Connecticut. Additions over the years included more dioramas of habitats and a wing donated by the Bedford family to display a collection of African animal mounts. Major change arrived in 1957 with the siting of I-95. Plans called for it to bisect the sanctuary with the highway taking nearly half the land for the highway and a rest stop. Appeals were futile with the State refusing to recognize the land’s value as a sanctuary. The initial offer of $20,000.00 was eventually settled at $42,000.00, no compensation at all for the enormous loss.

Now nestled between the highway and the railroad, it remains a surprising bird magnet, especially during migration when exhausted birds see the little pond and the dense shelter in the midst of all the asphalt. The bird banding program begun in the early 1970’s continues today under the leadership of master bander Judy Richardson with 124 different species banded to date. Educational programs linked with current state curriculum standards are offered to thousands of regional school children annually at the Sanctuary.

Birdcraft Sanctuary and Museum was named to the National Register of Historic Places in 1982 and as a National Historic Landmark in 1993. It is a stop on the Connecticut Women’s Heritage Trail. The Connecticut Ornithological Association was founded there in 1981. Its annual Mabel Osgood Wright Award which recognizes individuals who have made significant contributions to the study and conservation of birds in Connecticut was instituted in her honor.

In 1999 Connecticut Audubon added much needed educational space to the former caretaker’s cottage and restored the building, which was in need of repair. Restoration of the museum itself is underway at this time. Thanks to a major gift, the shell of the building has been stabilized and brought up to code. Funds are being sought to install modern educational exhibits inside, while retaining some of the historic features. The Sasqua Garden Club has adopted Birdcraft’s grounds. Native plants now enhance the exterior in the immediate area of the buildings and Mabel Osgood Wright’s fountain in her beloved wildflower garden has been restored. The commitment to conservation continues.