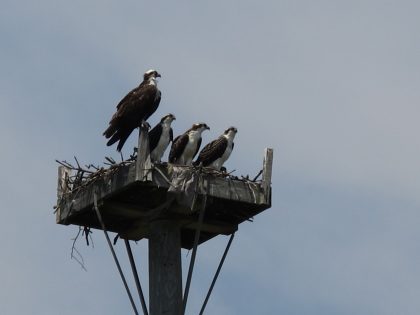 Ospreys in Norwalk, one of 394 active nests in Connecticut in 2017. Photo by Hugh McManus

February 19, 2018 – For years conservationists have known that the population of Ospreys in Connecticut is large and thriving. But for the first time now, they know where almost all of the Osprey nests in the state are located and that there are probably very few unknown nests to be found.

In each year of the project, the number of mapped nests grew by large percentages, mainly because the number of volunteers mapping the nests also grew.

But now that almost all of the nests are mapped, if the number of nests changes significantly in 2018 or beyond, it will reflect a real change in the Osprey population rather than an increase in the effort to find them.

“This means that wildlife biologists will be able to start to determine if the Osprey’s decades-long comeback has peaked in Connecticut or if there are still enough nesting areas and food for the population to expand,” said Patrick Comins, Connecticut Audubon’s executive director. “That’s what the project has been working toward since 2014. It’s a significant milestone.”

“A foundation of great volunteer work”

“That shows an amount of interest and concern for Connecticut’s birds that is awe-inspiring,” Comins said. “Everything this project has achieved is built on a foundation of great volunteer work. We are grateful for every Osprey Nation volunteer, and I hope all of them are proud of their work.”

Ospreys are one of the great conservation comeback stories. They eat only fish, which after World War II became contaminated with the pesticide DDT. The steady diet of DDT-laden fish raised levels of the pesticide in the Ospreys themselves. Compounds in the DDT caused the Ospreys to lay eggs with shells that were too thin and fragile to withstand incubation.

With no hatchlings to replace the adults, Ospreys neared extinction by the late 1960s and early 1970s. 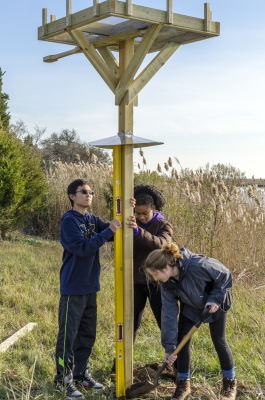 But DDT was banned in 1972, and government agencies and conservationists began erecting platforms for the birds to nest on – and gradually the population began to grow.

Known nesting locations were plotted on an interactive map, and volunteer stewards chose which locations they wanted to monitor.

Record Numbers of Nests and Fledglings

The Osprey Nation report, written by 2017 Osprey Nation coordinator Genevieve Nuttall, shows that the number of Osprey nests and baby Ospreys in Connecticut reached record high numbers in 2017, indicating that there is ample food in local waterways to sustain these fish-eating raptors.

Here are the numbers over the years:

Osprey Nation volunteers found Osprey nests in all counties of Connecticut except Tolland County. The areas of largest populations were along Long Island Sound and the Connecticut River, where fish are abundant.

Although it might take several more years of data collection to know for sure, there was one indication in 2017 that the Osprey population in Connecticut might be nearing a peak.

The report says, “The Osprey population has grown so much that some areas are now crowded with adults. In 2017, many monitors noticed intrusions of an individual Osprey on an established nest. There were more incidences of aggression between Osprey males. These observations may indicate that the population is approaching its maximum size in Connecticut. Future years will show if the numbers continue to increase or if they stabilize at a certain level.”