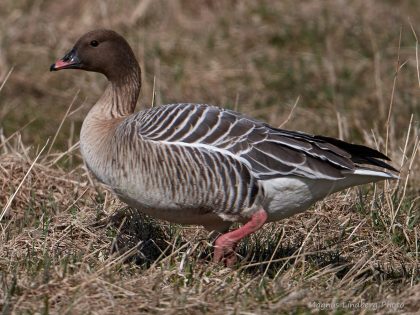 by Andy Griswold, Director of Connecticut Audubon’s EcoTravel program
Anser is Latin for “goose,” and brachyrhynchus comes from the Greek brakhus meaning “short” and rhunkhos meaning “bill.” This species breeds in eastern Greenland, Iceland, and the Svalbard archipelago. It is migratory and winters in northwest Europe, with most birds spending their time in Ireland, Great Britain, the Netherlands, and western Denmark.

Pink-footed Goose is becoming a more regular visitor to the United States east coast, with recent sightings in Massachusetts, Connecticut, Rhode Island, New Jersey, Maryland, and out on Long Island. The New York bird, likely a vagrant from eastern Greenland, has been on site for a number of weeks and recently was seen by participants joining EcoTravel’s annual Montauk weekend getaway. We knew the bird was there, but it hadn’t been seen for almost a week. Travelers were energized by the find and declared it the “Bird-of-the-Trip.” Certainly a life bird for most.

Where to find it: If you want to find one for yourself, you might consider joining us on March 14 as we head back to Long Island for the day in search of the goose and other winter specialties.

In Connecticut, the goose was seen this winter in the Pawcatuck River in North Stonington. That bird seems to have moved on, but all goose flocks, no matter where in the state, should be checked. Having a good spotting scope is a must.

Goose flocks in the Storrs area have yielded many a rare goose over the years, including a Ross’ Goose in recent weeks. Other species including Greater White-fronted Goose, Snow Goose, and Barnacle Goose have been reported recently in Connecticut.

What it looks like: The Pink-footed Goose is a medium-sized goose; 24–30 inches long, wingspan 53–67 inches, and weighing four to seven and a half pounds. A short bill (bright pink in the middle with a black base and tip) and pink feet are notable field marks.

The body is brown, the head and neck darker brown, rump and vent white, and the tail is black with an easily seen white tip. Upper wing-coverts are pale bluish-grey (similar to Graylag Goose), and flight feathers are black with some gray at the base of the primaries. Birds in mixed flocks with Canada Goose look frosty backed, comparatively.

This species is most closely related to the Taiga Bean Goose, Anser fabalis (historically treated as a subspecies), sharing a similar black-and-colored patterned bill, but differing in having pink on the bill (and legs) versus the orange of the bean goose.