March 4, 2019 – The Connecticut Audubon Society released its Osprey Nation 2018 season report today, showing that the number of Ospreys and Osprey nests found and tracked by the program’s 300-plus volunteers rose for the fourth year in a row.

Each year since 2014, Connecticut Audubon’s Osprey Nation program has gathered information on the total number of nests (including unused nests), nests actively being used by Ospreys, and nests for which volunteers have collected data. There are more nests however than volunteers, and although many volunteers monitor more than one nest, some nests invariably receive no coverage.

To prepare for the 2019 season, Connecticut Audubon has training sessions scheduled for new and returning stewards. For details and to register, click here.

To read a PDF of the report, click here.

The number of volunteer stewards participating in Osprey Nation has increased annually, as have the numbers of nests, nests with data, active nests, and fledglings, as shown below (with percent year-over-year increases in parentheses). 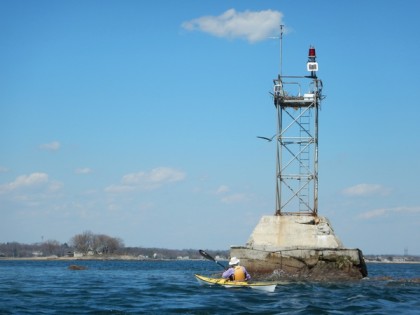 Michelle Sorensen kayaks to the nest she monitors in Norwalk.

A year ago, Connecticut Audubon speculated that the Osprey population was approaching maximum carrying capacity in Connecticut and that the increase would begin to level off. In 2018, the number of active nests in the state rose by 5.5% and the number of fledglings by 19.4%. Both were the lowest year-over-year increases since the program started in 2014.

Osprey Nation stewards found 775 nests and collected data on 603 of those in 2018; 416 of the nests were active, meaning they were occupied by an Osprey pair. The 416 active nests fledged 725 Osprey young.

Inactive nests were never occupied. Nests with no data were unmonitored.

In 2018, there were 62 failed nests. Nests fail for various reasons: predators such as raccoons or Great Horned Owls eat the young; Ospreys die after becoming entangled in monofilament fishing line; or the adult Ospreys were new, inexperienced nesters and hadn’t learned how to raise and care for their young, among other possibilities.

Connecticut saw several highly-publicized Osprey fatalities in 2018 because of monofilament line entanglements. The Connecticut Audubon Society in collaboration with the Ash Creek Conservation Association in Fairfield and Bridgeport has been involved in one of a number of efforts to encourage proper disposal of fishing line.