“Some threatened shoreline birds had good years in Connecticut, others not so much” – in the Hartford Courant. 11/20/19


November 19, 2019 — Thanks to the efforts of almost 100 volunteers on Connecticut’s beaches, two of the state’s most vulnerable shorebirds had highly successful breeding seasons in 2019, reflecting a generally safer shoreline locally for federally and state-threatened birds.

The Audubon Alliance for Coastal Waterbirds announced that the 57 pairs of Piping Plovers that nested in the state fledged 1.72 chicks per pair, higher than the regional goal of 1.5 fledglings per nest along the Atlantic Flyway—a goal which, if it were sustained, would result in an increasing population.

The plovers and oystercatchers nest only on beaches, which limits their nesting opportunities and leaves them vulnerable to various threats including dogs, predators like raccoons and foxes, and people who might not be aware that there are nests nearby. Piping Plovers are listed as a threatened species both federally and in Connecticut; oystercatchers are threatened in Connecticut.

The nesting success of the plovers and oystercatchers in 2019 was a direct result of the time and effort put in by the volunteers and staff of the Audubon Alliance. Ninety-three volunteers and 21 staff patrolled Connecticut’s beaches and monitored nests, the most in the nine years of the program.

The years of observations by Alliance volunteers and staff show that the highest concentrations of Piping Plover nests can generally be found at Long Beach in Stratford-Bridgeport; at the Milford Point Coastal Center in Milford and Sandy Point in West Haven; and at Griswold Point in Old Lyme and Bluff Point in Stonington.

American Oystercatchers often nested on the same beaches as the plovers but also found nest sites on numerous islands in Long Island Sound.

Unfortunately, despite the increased effort by the alliance, Least Terns, another threatened species, saw historic lows, at 0.28 fledglings per pair. The terns face various threats, including an increase in predators, rising tides that might wash out their nests and, because they nest during the height of beach season in July, more human disturbance than other shorebirds.

The Audubon Alliance consists of Audubon Connecticut (a state office of the National Audubon Society), the Connecticut Audubon Society, the Roger Tory Peterson Institute of Natural History, and the State of Connecticut Department of Energy and Environmental Protection. The Alliance trains and coordinates a cadre of volunteer beach stewards who work with state and federal agencies to monitor nesting coastal birds and educate the public about the species found in and around the Long Island Sound. Most of the Alliance’s work concentrates on Piping Plovers, American Oystercatchers, and Least Terns.

To volunteer to help nesting shorebirds next year email ctwaterbirds@gmail.com.

Highlights of the 2019 season for the three species include:

This is good news for Piping Plovers in Connecticut; our state productivity is higher than the regional goal of 1.5 fledglings per pair along the Atlantic Flyway.

This year was the 14th time since 1996 that the production rate has topped 1.5 chicks per pair. That success rate is the regional goal because, if sustained over time and a wide enough area, it is high enough to result in an increase in the number of Piping Plovers.

A possible reason for the decline in pairs is the reduction of suitable habitat. Over the past few years, many beach habitats have become heavily vegetated due to lack of overwash in certain areas. While Piping Plovers use some vegetation on the beach, too much vegetation makes a beach unuseable for nesting. The Alliance will discuss possible opportunities to improve beach habitat for Piping Plovers in these areas.

This species is federally- and state-threatened because of threats such as diminishing habitat and human disturbance. The Alliance works to ensure that Piping Plovers have protected habitat by placing string-fencing and exclosures around nesting areas. Field technicians also work with beachgoers to minimize human disturbance.

The success of this species is strongly linked to volunteer efforts. With additional volunteers, and the purchase of a boat, the Alliance was able to more frequently monitor the islands that American Oystercatchers use for nesting. We now have a better record of breeding oystercatchers than ever before and even found additional nesting sites that had not been located in years past.

Thanks to the expansion of our banding and nest camera program, we learned that some of Connecticut’s breeding American Oystercatchers migrate to Florida, Georgia, and even all the way to the Gulf of Fonseca in Central America for the winter. Since 2018, field technicians have trapped and banded breeding oystercatchers to track their migration. In 2019, we placed trail cameras on various oystercatcher nests to record instances of human disturbance and predation. The results help us understand which sites receive the most disturbance and/or predation and how that contributes to nesting success.

Significantly low breeding success rates for Least Terns. In 2019, 298 pairs of Least Terns were observed across the coast of Connecticut, but only 84 chicks survived long enough to fly from their nest sites. This productivity of 0.28 fledglings per pair is higher than last year but significantly lower than historical productivity levels. In addition, the number of pairs returning to Connecticut, while slightly higher this year than last, is lower compared to historical records.

Piping Plovers are easier to protect because their nests can be enclosed in wire cages. The cages allow the birds to come and go while keeping predators at bay and signalling to human beach-goers that a nest is nearby. Oystercatchers tend to protect themselves by nesting on remote islands in Long Island Sound. Terns nest on beaches but, because the parents fly to and from the nesting area throughout the season, the nests can’t be enclosed.

Helping federally and state-threatened birds nest and raise chicks on our state’s beaches requires a community-wide effort. Shorebird nesting season is successful because of local people who volunteer to educate and engage with beachgoers each summer, as well as efforts by beachgoers themselves to “share the shore” by keeping a safe distance from nests and chicks. 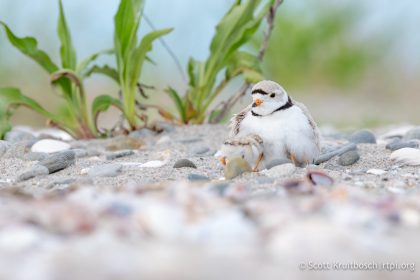 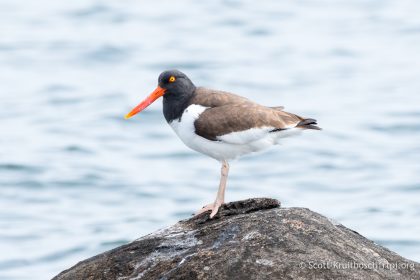 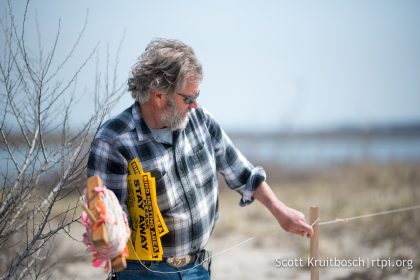 The success of the plovers and oystercatchers is largely because of the work on the Alliance volunteers. Photo by Scott Kruitbosch/RTPI. 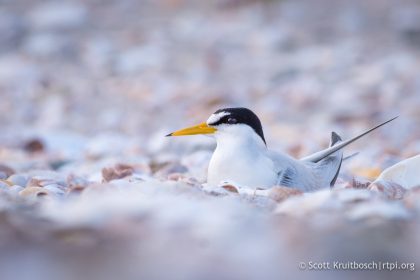 Least Terns are harder to protect and didn’t do as well as plovers and oystercatchers. Photo by Scott Kruitbosch/RTPI. 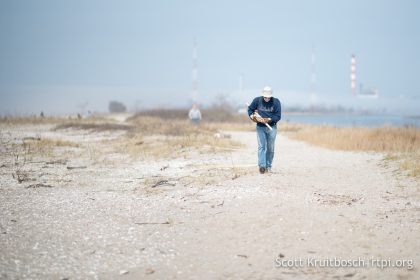 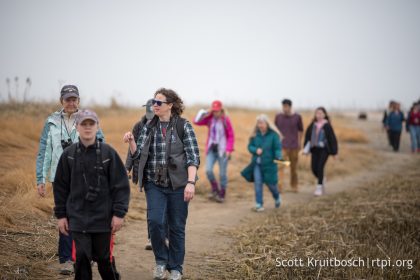 Alliance volunteers heading out to the beach to look for plovers and oystercatchers. Photo by Scott Kruitbosch/RTPI.