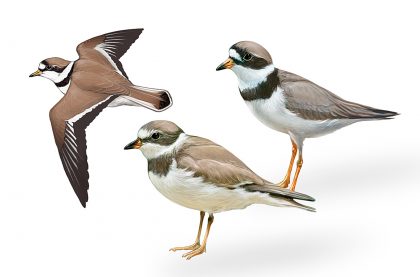 Illustrations by Patrick J. Lynch, from A Field Guide to Long Island Sound. Note the dark back and unbroken breast band. Piping Plovers, which you might see on the same beaches, are lighter in color and the breast band is broken.


Edited from a version published in July 2017.by Helena Ives
Where and when to find them: Semipalmated Plovers are starting to appear on Connecticut beaches during spring migration.

Named for their semi-webbed toes, which allow them to walk on different substrates, Semipalmated Plovers can be found foraging for insects and other invertebrates on mudflats and beaches while they migrate to their nesting territory on Arctic beaches. They winter on the southern perimeter of North America and travel an average of 3,000 miles during both fall and spring migration.

The best places to look in Connecticut include the Coastal Center at Milford Point, Hammonasset Beach State Park, Sandy Point in West Haven, and Greenwich Point Park, although they are common enough so that it’s worth keeping your eyes open for them any time you go to the beach.

These relatives of the Killdeer and Piping Plover (Charadriidae family) are typically seen from late March through late May, and then during the longer fall migration, from mid July through early October, with an occasional non-breeding adult spending the summer in New England.

Both migrations typically begin with breeding and molting adults and conclude with juveniles and first/second year birds. 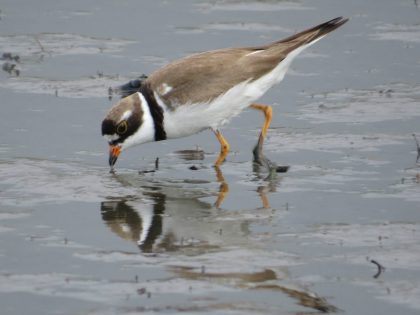 How to find them: Semipalmated Plovers can usually be found mingling in large groups with other migratory shorebirds, including Semipalmated Sandpipers, Least Sandpipers, Ruddy Turnstones, and Piping Plovers.

Similar in size and markings to Piping Plovers, Semipalmated Plovers can be distinguished by their dark brown body plumage, the black band around their eye and forehead, and their complete black breast band (usually broken in Piping Plovers).

Although Semipalmated Plovers are generally quiet while foraging on shore, they can be identified by their flight call — a short and husky chu-WEE or too-ee, with other variations possible.

Conservation status: After their populations were crucially depleted in the late 1800’s due to unrestricted hunting and shooting, Semipalmated Plover populations recovered quickly and are now listed as “Least Concern” on the IUCN Red list and are widespread across their territories in North America.

Helena Ives is a naturalist for the Connecticut DEEP at the Goodwin State Forest and Education Center in Hampton. Previously, she worked for Connecticut Audubon monitoring birds as part of the Audubon Alliance for Coastal Waterbirds.