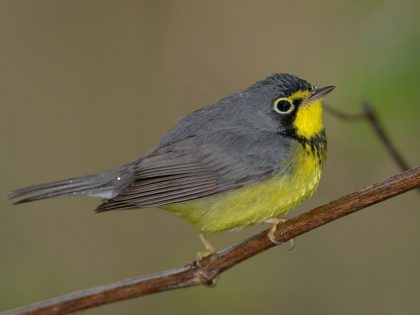 by Paul Cianfaglione. Video by Gilles Carter
Spring is by far the best season for finding wood warblers in Connecticut, including Canada Warblers — eBird shows dozens if not scores of sightings within the last two weeks.

When searching for Canada Warbler, it is important to become familiar with its unique song. One of my favorite ways of locating a Canada Warbler is by slowly driving along Greenwoods Road in Peoples State Forest, listening for its clear, loud chip note, followed by an abrupt, explosive series of short notes that regularly ends with a three-note phrase.

Many birdwatchers who so eagerly await their spring arrival, suddenly forget about warblers once nesting season has begun.

The Canada Warbler approaches its southern limit of breeding distribution in Connecticut and further south in the Appalachian mountain range. It undertakes a long annual migration for a wood-warbler, wintering primarily in northern South America.

During the breeding season, Canada Warblers are found in mixed coniferous-deciduous forests with a well-developed understory, which often includes dense stands of mountain laurel.

Canada Warbers nest at Connecticut Audubon’s Croft preserve, in Goshen. Places such as Peoples State Forest in Barkhamsted and Mohawk State Forest in Goshen provide such habitat. You can find others on eBird. 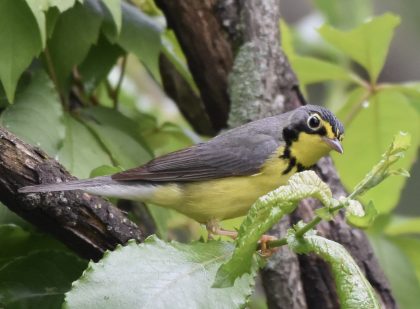 Partners in Flight North American Land Bird Conservation Plan lists this as a species of high conservation concern in the Northern Forest region. The Northeast Endangered Species and Wildlife Diversity Technical Committee recognize Canada Warbler as one of the region’s highest priorities for conservation and research. (Source: Birds of North America Online Version, 2017).