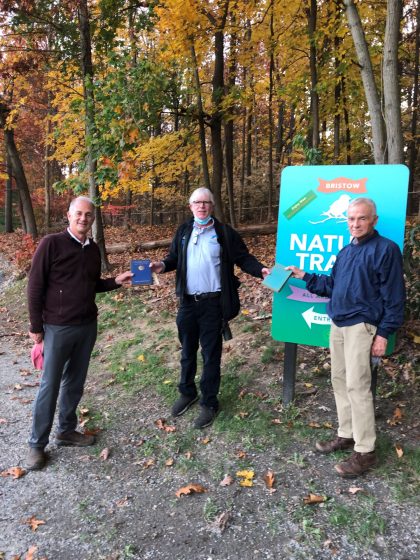 Now Connecticut Audubon is back to help the town’s Conservation Commission as it restores the 17-acre sanctuary’s habitat.

The sanctuary sits near the New Canaan train line and is next to Mead Park. It’s in a residential area and over the years development has gotten more dense. Invasive plants have pushed out native species.

Connecticut Audubon Executive Director Patrick Comins and habitat steward Stefan Martin have been providing advice based on Connecticut Audubon’s experience at Smith Richardson Sanctuary in Westport, Deer Pond Farm in Sherman, and other sanctuaries where similar restorations are underway.

Wildflowers, shrubs, and trees that provide year-round cover and food for birds are going in. Invasives are on their way out. Patrick and Stefan also helped on a plan for nest boxes and the best locations for feeders. The partnership will continue at least until the sanctuary’s grand reopening, which is being eyed for 2024, the Bristow’s 100th anniversary.

A sanctuary bird list from 1925 lists 57 species. That includes some birds unlikely to be found there again any time soon — Northern Bobwhite, American Bittern, and Eastern Whip-poor-will, for example (although you never know).

But it also includes a long list of warblers that might indicate that Bristow could be the kind of songbird oasis during migration that Birdcraft has proved to be over the years.

We hope to be there with our old friends some early morning in May to see for sure.