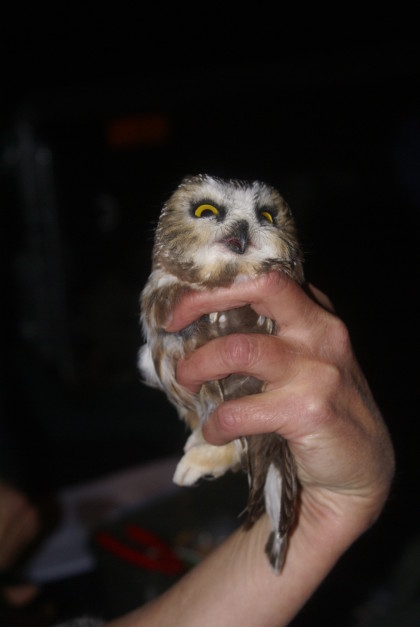 November 19, 2020 — In honor of the tiny bird that survived in the Rockefeller Center Christmas Tree, today’s Daily Bird is Northern Saw-whet Owl.

It is important to note that saw-whet owls roost quietly in trees during the day and can seem tame. They are not. Do not disturb them, do not get too close, and absolutely do not attempt to touch them. Stories abound of foolhardy people being impaled with a saw-whet owl talon.

by Michael Aurelia, former member of the Connecticut Audubon Society’s Board of Directors

The Northern Saw-whet Owl is widely distributed throughout Connecticut wherever large tracts of forested land are present. These forests can be deciduous, coniferous or mixed. Saw-whet owls are the smallest of our owls and weigh about as much as a robin.

Because saw-whets are preyed upon by larger raptors including Eastern Screech, Barred and Great Horned Owls, you seldom hear them calling when other owls are present.

When walking in forested habitat at night or early in the morning, you are more likely to hear a saw-whet owl before you see one. Their call is a “too-too-too-too” that can continue for quite a while.

You can hear it here, on the Cornell Ornithology Lab website. The call supposedly sounds like a saw being whetted (a sound we’re not likely to hear much these days), hence the name.

Saw-whet owls are not that common across the state though individuals have been reported on eBird.org numerous times.

What it looks like: The Northern Saw-whet Owl is a very small, brownish-white owl without ear tufts. Both the male and female look similar although the female is slightly larger. Juveniles and adults have a distinctive white “V” between their eyes on the facial disc.

This owl is almost always found in forested areas with an open understory and usually near wooded swamps or riparian habitats. The more mature the woods the better, because owls like large trees with plenty of cavities. This little owl is not easy to spot because it likes to roost in thick evergreen trees or shrubs during the day. Look for a “white wash” near the trunk of the plant.

To find the most recent reports of this owl, go to eBird.org and choose Explore and then “species maps”; insert “Northern Saw-whet Owl.” Then for the date, choose “year around current year” and for the location, Connecticut. During the winter this little owl can usually be found in Fairfield County at Greenwich Point Park or Sherwood Island State Park. They’ve also been seen this winter at Hammonasset Beach State Park, in Madison, and Haley Farm State Park, in New London.

Other interesting facts: Saw-whet owls are in the same genus as the Boreal Owl. Although this owl can be an opportunistic predator it usually catches small mammals, mainly mice. The literature indicates pairs are monogamous and the female is slightly larger than the male. There are not many confirmed records of this little owl nesting in Connecticut.

Conservation Status: The Saw-whet Owl’s status in Connecticut can best described as stable. As forest habitat returned to Connecticut over the last century, the owl’s numbers increased.

The key to protecting this little owl in Connecticut is to conserve large forested habitats near wetlands and watercourses. On the national level the IUCN indicates the saw-whet owl’s status is of Least Concern but the population trend is decreasing.