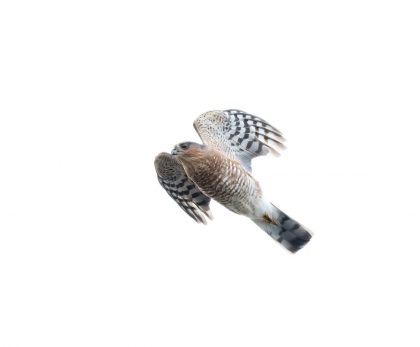 Often, the easiest way to spot one is to see it attack the birds at your feeding station. But in the fall, look for it chasing migrating songbirds and often soaring high overhead. Sharpies nest in the deep woods and are not observed very often in breeding season.
Facts about the bird: Sharp-shinned Hawks are pursuit hunters, meaning they chase their prey. About 90 percent of their diet is small songbirds. They can be observed harassing larger birds of prey like Red-Tailed Hawks.

Conservation status: Sharp-shinned Hawk populations used to be in decline because of DDT use but since the ban of DDT in the 1970s they have rebounded and are much more plentiful. Although listed as Least Concern by the IUCN, the nesting population of Sharp-shinned Hawks are officially endangered here in Connecticut.

Andy Rzeznikiewicz is the sanctuary manager for our northeast Connecticut sanctuaries.