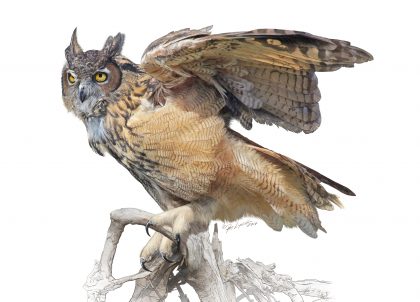 by Joe Attwater
March 29, 2021 — Great Horned Owl is one of the earliest nesting birds in Connecticut, and you may already start to see the downy heads of chicks poking out the top of their stick nests this time of year.

They are the largest commonly found, year-round owl species in the state (slightly smaller than the uncommon winter visitor the Snowy Owl, and shorter than the very rare Great Gray Owl) and one of the most adaptable.

Great Horned Owls hold the distinction of having the most diverse diet of any North American raptor. They eat almost anything they can get their talons on.

Fearsome predators
Though their main prey consists of small birds and mammals, they will take down larger and more fearsome prey such as porcupines, Barred Owls, and even Peregrine Falcons.

Though weighing in at only 3 pounds, they have a grip strength of 28 pounds, making them formidable predators.

With it’s distinct large ear tufts, Great Horned Owls cut a familiar silhouette against a moonlit sky. Those ear tufts are simply ornamental though, with the owl’s ear located on the side of the head concealed under feathers.

During the day, look for a tawny orange face and densely barred chest, with a white patch on the throat that isn’t always visible. Given their sheer size, these owls are unmistakable. Males and females look the same, thought females are slightly larger.

They can usually be seen roosting in branches close to the trunks of trees or flying over open areas at dusk.

They are mostly nocturnal but have been known to hunt during the day. Listen for their classic “hoo hoooo hoo hoo” call that sounds like a deeper Mourning Dove. The males have a slightly deeper call than females. 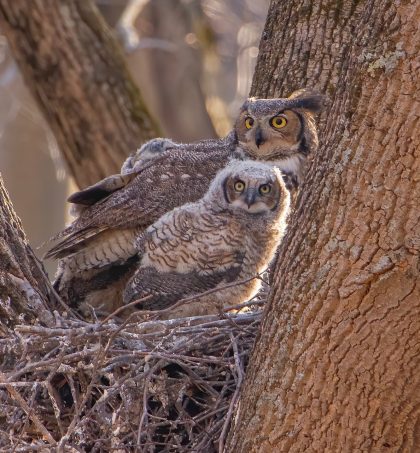 Where to find it
Great Horned Owls can be found in a variety of habitats, but gravitate towards second-growth forests, swamps, and orchards. They usually prefer somewhere with a mix of forest and open space, but can be found in wooded parks, suburban neighborhoods, and cities.

Listen for crows and even songbirds making a racket, as these birds will often harass roosting owls.

This time of year, Great Horned Owls will have fledglings or at least be on nest. It is important to give these birds space and use discretion when posting the location of owls so as not to bring in crowds of people that may cause unnecessary stress on the birds.

Great Horned Owls are charismatic birds that draw birders and non-birders alike, but getting a good photo is never worth the health and safety of the bird.

Conservation Status
Great Horned Owls are common and widespread, though their numbers have declined 33% over the past 50 years throughout their range, and their populations often fluctuate with prey availability. They are of low conservation concern, and the species have adapted well to habitat changes.

Patrick J. Lynch and Tomas Koeck are members of Connecticut Audubon’s Board of Directors.