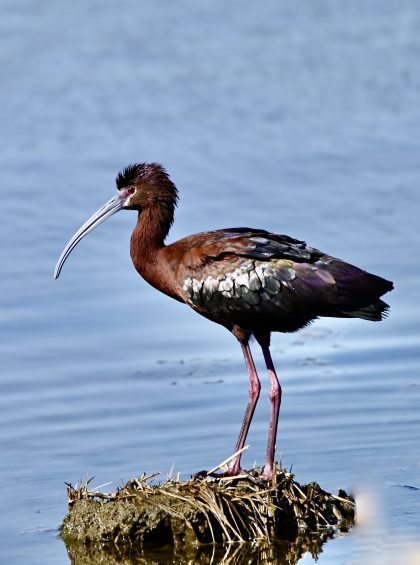 To get the Daily Bird via text, click here.

Like its close relative the Glossy Ibis, the White-faced Ibis is a darkly colored wading bird of the salt marshes. Look for a bird about the height of a Snowy Egret, plodding along as it probes the mud below the marsh grasses with its long, down-curved bill.

The two ibis species can be distinguished by subtle differences in eye, face, and leg color. In all plumages, at close range or with a spotting scope, you should be able to see the red iris of the White-faced Ibis.

Leg color of adult birds is noticeably brighter and a white border around a pinkish-red face is where this bird got its name. Additionally, bill color is gray as opposed to the brownish bill of the Glossy Ibis.

White-faced Ibis is a colonial nesting species, building its nest in low shrubs and bushes. Its normal breeding range extends from the western United States south through all of Mexico, reaching as far south as southeastern Brazil, southeastern Bolivia, central Argentina, and along the coast of central Chile. Normal winter range extends from southern Gulf Coast states and California, south including its breeding range.

Conservation status: With an estimated total population of 1.2 million individuals and increasing, White-faced Ibis is considered to be of Least Concern by the IUCN. The bird is not uncommon throughout its range, but it is a not-so-common western visitor here in Connecticut. Enjoy!