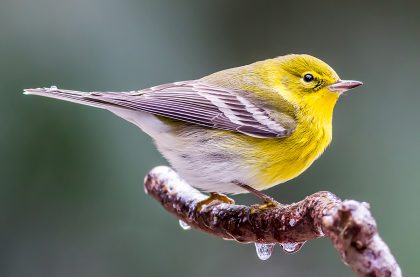 By Greg Hanisek
April 16, 2021 — Of all the warblers that breed in Connecticut, the first to return in spring is the Pine Warbler, arriving in mid- to late March, just ahead of Louisiana Waterthrush.

What it looks like: Pine Warblers range from bright yellow and green birds to non-descript brownish-gray creatures depending on age, sex and time of year.

In early spring they’re at their best. The males are bright yellow from throat to belly with variable streaking on the breast sides. The lower belly and long undertail coverts are white, and they have large white tail spots. Upper parts and ear coverts are olive green. Two white wing bars are prominent.

When puzzling over a bird with wing bars and yellow underparts, look for two key Pine Warbler features: a) an unstreaked back; b) a yellow or pale extension of the throat curling up behind the ear coverts. At their dullest, probably as immature females in late summer/early fall, neither yellow nor green may be apparent, but the wing bars and unstreaked back remain.

It’s also worth noting that Pine Warblers are large and heavy-billed by warbler standards. They’re typically methodical rather than flitty in their movements, sometimes creeping along limbs and probing clumps of pine needles.

When listening to a known Pine Warbler sing, keep this phrase in mind – “short and sweet.” Compared to the song of the Chipping Sparrow, the Pine Warbler’s is more musical and cuts off more abruptly.

Juncos, which are gone from most of Connecticut during the warbler’s breeding season, have a looser, more erratic trill. 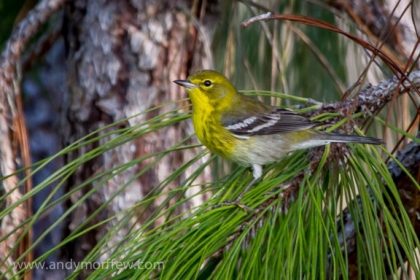 In May another trill singer, the Worm-eating Warbler, comes into play. Its song is the highest and most insect-like of this group. All are subject to variation, and learning them take plenty of practice.

Where and how to find it: Pine Warblers live up to their common and scientific names — they’re very closely associated with pine trees. In Connecticut they breed primarily in Eastern White Pines, and that’s where you’ll hear their songs during the breeding season and often into fall. Other species of pines are favored elsewhere in their range through eastern North America.

The best way to find them is to do a little homework on evergreens. Pine Warblers have little interest in planted groves of Norway Spruce or beautiful glens shaded by Eastern Hemlocks. Visit parks, land trust tracts, watershed properties or anywhere else with plenty of pines. Wintering birds will visit suet feeders.

This is a hardy warbler that winters in North America, primarily in the Southeast, but a few winter in southern New England.

Because a few attempt to winter, they can be found throughout autumn, but their numbers dwindle after mid-October. They’re more likely to be seen away from pine trees during fall migratory flights than at any other time of year.

Interesting fact: Pine Warblers are unusual among Wood-warblers in that both their breeding and wintering ranges lie almost entirely within the United States and Canada, although resident races are present in the Bahamas and on Hispaniola.

Conservation status: Listed as least concern by the IUCN.