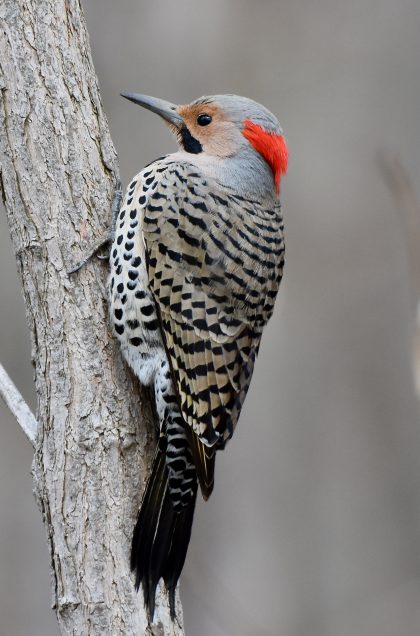 If Northern Flickers are breeding near where you live, you know it. Their calls pierce the woods in April, loud, long, and persistent. Take the time to look for the bird too because, as Andy Rzeznikiewicz says in today’s Daily Bird, “their various colors and markings are spectacular.”

Gilles Carter, a member of Connecticut Audubon’s Board of Directors, took the videos and photos.

by Andy Rzeznikiewicz, Sanctuary Manager
April 27, 2021 — The Northern Flicker is a fairly large woodpecker species.  Unlike most woodpeckers it spends a great deal of time feeding on the ground on various insects, particularly ants and grubs.

When flushed, its white rump and the yellow wing feathers are clearly visible.

Some flickers migrate out of the area for winter, but a fair number winter in Connecticut and remain here to nest. They nest in the woods, excavating holes in dead or dying trees.

They’re  considered a common bird that is in steep decline over the past few decades. If you check the eBird map for Northern Flicker in Connecticut, however, you’ll see that it is still covered with location markers, so it shouldn’t be hard to find one.

Males and females look virtually alike, except the males have a black mustache below their bill; females lack that. If you can get close to one and view it through your binoculars, their various colors and markings are spectacular.

The birds we see here in Connecticut and elsewhere in eastern North America are “yellow-shafted” flickers, so named for the yellow wing feathers visible as they fly. You can find the red-shafted version of Northern Flickers in the Rocky Mountains and  further west, with some overlap in the Great Plains states.

The Cornell Lab describes the flicker’s call as  “a loud, rolling rattle with a piercing tone that rises and falls in volume several times. The song lasts 7 or 8 seconds and is quite similar to the call of the Pileated Woodpecker.”

As for the Pileated Woodpecker, Cornell describes its call as “a high, clear, series of piping calls that lasts several seconds. The sound is quite similar to a Northern Flicker’s rattling call, although it tends to be more resonant and less even in tone, with changing emphasis or rhythm during the call. ” 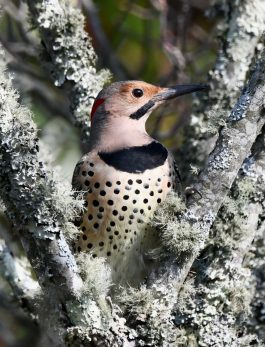 Listen to the Northern Flicker here.

Listen to the Pileated Woodpecker here.

One thing you can do to help flickers is not apply chemicals and treatments to your lawn, for obvious reasons — pesticides are poison that kill the food flickers and other birds rely on, and can sicken or kill the birds themselves.

In the fall and winter Northern Flickers shift to feeding on berries and will visit beef suet feeders.  Your best chance of success is to attach the beef suet to a tree trunk, you can put the pieces in one of those suet baskets.  Another benefit to real beef suet is the squirrels leave it alone!

Northern Flickers nest at almost all of Connecticut Audubon’s sanctuaries. The Bafflin Sanctuary, at the Center at Pomfret, has many pairs.  A good place to check is around any of the wetland areas with standing dead trees