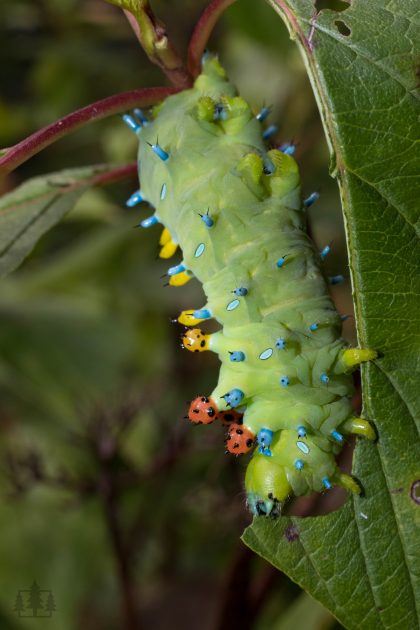 Sherman, August 9, 2021 — On a routine walk at Deer Pond Farm to check on a habitat improvement project, Jim Arrigoni found a creature he had never before seen in his many years as a conservation biologist: the caterpillar of a cecropia moth.

Cecropia moths are North America’s largest moth. Its wing-span can reach almost six inches (there are photos via Google here). The caterpillars are about five inches long. They feed on a number of small trees, including wild cherries, willows, alders, birches, and dogwoods. And then in late summer they form a cocoon for the winter before emerging the next year.

The caterpillar Jim found was on a red osier dogwood. The tree was one of 33 dogwoods, viburnums and cedars that he planted last year with a team of volunteers and staff led by him and habitat steward Stefan Martin.

Their project was to turn a half-acre of the sanctuary into an autumn rest-stop of shrubs and small trees whose fruits ripen in late summer and fall, for migrating songbirds.

Jim described it in an email: “The huge caterpillar was not well-hidden and so it was quite obvious and immediately drew my attention as I scanned the limbs for fruits.”

It was “bright and garish,” with a “space creature-like” appearance. He used his iPhone to photograph it and submit the photo to iNaturalist, which identified it as a cecropia moth caterpillar.

Cecropia moths aren’t endangered but they can be rare in parts of their range.

Jim and Stefan, who together have about 40 years of professional experience, have never seen either the caterpillar or the moth.

Its presence in that part of the sanctuary is an early indication that the autumn rest-stop project is a success. The work was funded by a grant from the Connecticut Ornithological Association.

Jim and Stefan others will be watching closely over the next few months to see which migratory songbirds stop there to rest and feed.