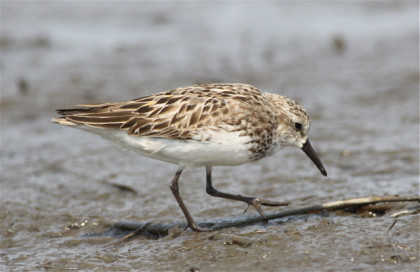 Restrictions on horseshoe crab fishing are likely to help Semipalmated Sandpipers, the population of which has fallen by 80 percent. Photo courtesy of Frank Mantlik.

December 15, 2021 — Connecticut Audubon needs you to write in favor of a proposed change to state regulations that are likely to benefit shorebirds.

The change, proposed by Connecticut Department of Energy and Environmental Protection, would lower the number of horseshoe crabs that can be caught in the state’s portion of Long Island Sound.

That is likely to help species such as Red Knot and Semipalmated Sandpiper, which rely on horseshoe crab eggs for food during their migration through Connecticut.

The CT DEEP is taking written comments from the public until Sunday, December 19. We’ve prepared short, draft comments for you to work from.

In Connecticut it’s legal to catch horseshoe crabs for bait in May, June, and July.

Fishermen catch them by hand. The most likely time for that to happen is when the crabs come ashore to lay eggs. The crabs do that in late spring and early summer, primarily during the full and new moons.

Under the new regulations, horseshoe crab fishing would be banned for 5-day periods around the new and full moons in late May and early June.

That means that fishing would be banned during the part of the season when it’s easiest to catch them and also when it’s most important that the crabs be allowed to come ashore and then retreat to Long Island Sound.

In addition, fishermen would be limited to a catch of 150 crabs a day, down from the 500 they’re allowed to catch now.

The CT DEEP estimates that the new regulations will reduce the horseshoe crab take by about 62%.

In recent years, about a dozen licensed fishermen have caught between 15,000 and 30,000 horseshoe crabs a year in Connecticut.

The CT DEEP estimates that the new regulations would reduce the annual catch to about 5,700 to 11,400 crabs a year.

Horseshoe crab fishing is already banned at key shorebird sites in Milford, West Haven, and Westbrook, as well as in all of Stratford,. Connecticut Audubon has supported a complete ban on horseshoe crab fishing elsewhere in Long Island Sound and will continue to monitor horseshoe crabs and the birds that depend upon them to see if conditions are improving.

We support this current proposal as a critical step and thank the department for the opportunity to express our strong support for this proposal.