Young, Gifted, and Wild About Birds 2022

The 2022 season concludes with an Earth Day special. 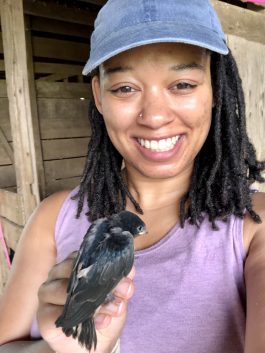 Barn Swallows, like most birds that catch prey on the wing, are experiencing a population decline.

Light pollution is a global issue that affects all wildlife.

The link between the two is the focus of work by Murry Burgess, a Ph.D. student in Fisheries, Wildlife, and Conservation Biology at North Carolina State University. She is conducting field experiments with Barn Swallow chicks to determine how artificial light affects their growth, physical development, and metabolic health.

The result might be problems stemming from lack of sleep and altered nutrient allocation; and problems of the metabolic system, which could lead avian diabetes among other diseases.

Five top-notch younger-generation conservation scientists, plus an artist whose love of birds grew through her painting, will present their work via Zoom.

“Fantastic work and presentation. And your series is brilliant!”

“Well done! The Young, Gifted, and Wild About Birds series was both interesting and educational. A real treat to “meet” such an impressive cadre of young scientists. I’m truly grateful for their work. And, I look forward to the next series.” 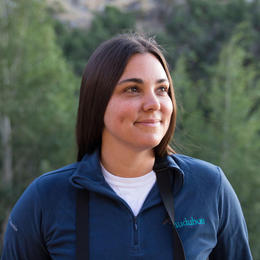 The bird population in North America has plummeted by 30 percent in 50 years. The biggest threat to their recovery is climate change. But quick, well-chosen actions can still be effective.

Dr. Brooke Bateman is the lead climate scientist for the National Audubon Society. She is based in Stony Brook, N.Y., and has conducted groundbreaking research into how climate change affects birds. She has also explained how protecting birds and mitigating climate change can work hand in hand.

She estimates that Connecticut can meet almost one quarter of its climate change goal through smart, targeted land protection. Her article in the 2021 Connecticut State of the Birds report is titled “Birds Are Telling Us It’s Time to Act on Climate Change: Natural Climate Solutions Show the Way.”

This might be the most important zoom presentation you watch this year! 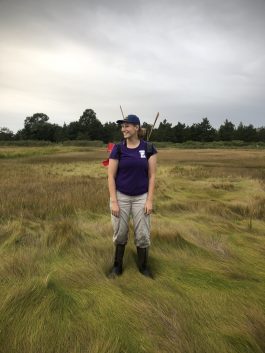 Rising sea levels are changing tidal marshes in Connecticut and beyond. But changes affect nesting birds in different ways. The populations of Saltmarsh Sparrow and Clapper Rail, for example, are declining. In fact, some scientists predict that Saltmarsh Sparrow is likely to go extinct by 2060.

And yet two other species, Seaside Sparrow and Willet, seem to be holding on.

Sam Apgar, a Ph.D. candidate at the University of Connecticut, is studying the success of tidal marsh birds in Connecticut. She will share her findings on how tidal flooding affects where those birds place and structure their nests and how each species responds.

Sam is working with her advisor, Dr. Chris Elphick of UConn’s Ecology and Evolutionary Biology Department. She lives in southern New Jersey and works for the U.S. Fish and Wildlife Service as a Pathways Intern. Her article in the 2020 Connecticut State of the Birds report, “Pandemic,” is titled “Fieldwork Delayed As Marsh Birds Try To Cope With Rising Sea Levels.”

How Drawing and Painting Can Help You Get In Touch With The Bird World
Jenny KroikThursday, March 3, 2022 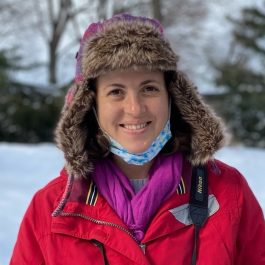 Jenny Kroik began to really love birds when she began to paint them. You might know her work from the cover of The New Yorker, or from Town & Country, Time, or numerous other publications, in print and online.

She began painting birds — with a quick, light hand and impressionistic style — as a way to get to know them better. She used field sketching and studio paintings to familiarize herself with the characteristics of the species she came across in parks near her home in New York City.

Born in St. Petersburg, Russia, and raised in Israel, Jenny immigrated to the U.S. in 2002. She studied illustration at the Art Institute of Boston, where she earned a BFA, and then earned an MFA in painting from the University of Oregon. Jenny has been working as a freelance illustrator since 2007, and as a university art instructor since 2006. 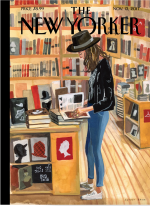 She’ll talk about her work and how it led her to birds. She’ll also talk about how drawing and painting can help you get in closer touch with the bird world. And she’ll conclude her presentation by showing us how she does it — painting a bird while we watch. 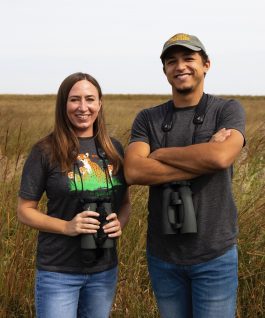 What does Staten Island have the Connecticut doesn’t? For one thing, a 2,000-acre grassland that has been colonized by scores of Grasshopper Sparrows, Sedge Wrens, Savannah Sparrows, and Eastern Meadowlarks.

The grassland is Freshkills park — the present home of those vulnerable grassland species and the former home of the world’s largest garbage dump.

It’s also the domain of Shannon Curley, Ph.D., and Jose Ramirez-Garofalo, a Ph.D. student, who have been studying the grassland birds there for six years.

They’ve documented a story of environmental reclamation and rebirth that is fascinating by itself and also relevant to Connecticut, where Grasshopper Sparrows and other grassland birds struggle to remain established.

Dr. Shannon Curley is an ecologist with the New York City Department of Parks and Recreation, and an adjunct professor at CUNY College of Staten Island. She studies the effects of climate change on birds, focusing on changes in species distributions, migration patterns, and community composition.

José Ramírez-Garofalo is a Ph.D. student in the Department of Ecology, Evolution, and Natural Resources at Rutgers University. His research interests include species distribution under climate change, grassland ecology, and the natural history of the New York City Area.

Young, Gifted, and Wild About Birds 2021