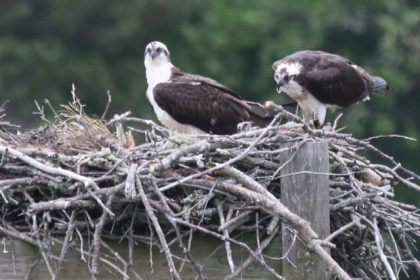 An Osprey nest in Stonington.

November 21, 2022 — The number of Osprey nests in Connecticut continued to grow in 2022, and the Osprey Nation volunteer monitoring project grew with it, allowing conservationists to keep a close eye on the species and its recovery from near extinction.

Osprey Nation is a citizen science project that documents Connecticut’s Osprey nesting data each year. Created in 2014 by the Connecticut Audubon Society, its purpose is to track the rise or fall of the Osprey population, map the location of nests, and collect data that potentially can be used as an indicator of other environmental issues.

The 2022 Osprey Nation annual report compiled from data collected by 385 volunteer stewards confirmed 606 active Osprey nests in the state — 48 more than in 2021. By all indications, Ospreys are continuing to recover from the devastation caused by the use of the pesticide DDT in the mid 20th century.

Read a PDF of the report HERE.

Those nests produced 835 fledglings, which was 23 fewer than in 2021. This marked the first time in the eight years of results that the reported number of fledglings fell.

The number of volunteer stewards was the highest since the start of the project in 2014. In all, almost 900 Connecticut residents have volunteered to monitor the state’s Ospreys.

The stewards volunteer throughout the nesting season, from April through August, contributing about 5,000 volunteer hours each year.

They regularly monitor the hundreds of nests that have been reported to us. Many stewards have been volunteering for several years and have gotten to know their nests very closely. The Osprey Nation Project would not succeed without them. 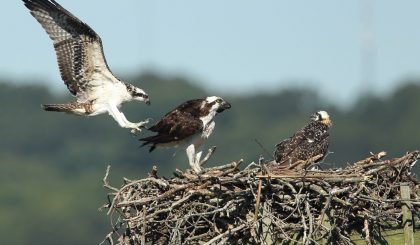 2022
While the Osprey Nation map shows 827 nests in 2022, 606 of those were active, meaning Ospreys attempted to reproduce in some capacity — eggs were laid or young were hatched. Regardless of whether the nest was successful, it was counted in the active nest category.

Out of the active nests, 413 successfully fledged 835 young.

As noted above, this year marked the first time since the project started that the number of confirmed fledglings went down year to year.

However the actual number of fledglings was likely greater than the reported count. For several nests, the data were inconclusive or incomplete. Reports on those nests were few, and while some had confirmed young, we received no reports about whether the young fledged. Many nests are inaccessible or difficult to view, which largely accounts for the nests we did not receive data for or were inconclusive.

While many Osprey pairs fledge their entire clutch, it is also common for some chicks to die before they leave the nest. So we don’t assume that the number of chicks reported equals the number that fledged. Fledging must be explicitly confirmed.

If the drop in the number of reported fledglings represented an actual decline, one year’s worth of data would not be enough to draw conclusions as to why that happened. Possibilities could include random fluctuation. It’s also possible that with 606 active nests and 835 fledglings comprising at least 2,047 individual birds the Osprey habitat in Connecticut has reached carrying capacity.

Because Ospreys were among several species driven to the point of extinction 50 years ago by the use of the pesticide DDT, one of the purposes of Osprey Nation is to serve as an early-warning system should other environmental problems arise.

There is no indication in 2022 that that is the case. That possible conclusion, as well as the others mentioned here, would require several more years of data to confirm.