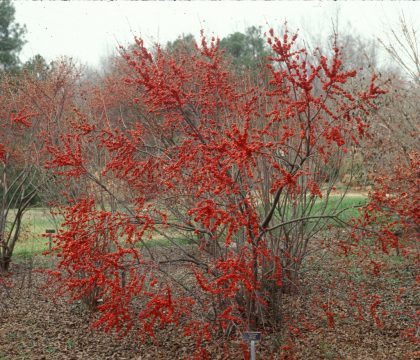 Winterberry at a time of year when it’s hard to miss its scarlet berries. Photo courtesy of Jim Robbins.

Homegrown Habitat provides advice on what and where to plant, one per month, written by Sarah W. Middeleer, a landscape designer whose work focuses on ecology and designing for wildlife. Sarah serves as vice chair of the Connecticut Audubon Board of Directors. Write to her at homegrown@ctaudubon.org.

This deciduous holly is native to Connecticut, ranging from Nova Scotia south to Florida and west to Ontario, Wisconsin and Missouri. It is found in wet areas, growing slowly to a height of six to 10 feet (sometimes taller) and a similar breadth.

In cultivation, however, winterberry can adapt to drier locations and, if given the room, assumes an elegant vase shape whose crown can become quite broad. Years ago, on my way to work, I would pass a magnificent winterberry in a yard with nothing else planted nearby. Its height was probably fifteen feet, its width maybe twenty. In winter it looked like a huge fountain with cheery red orbs suspended in its spray — so stunning that I would nearly miss the upcoming curve in the road as I drove by.

Like other hollies, winterberry produces male and female flowers (greenish-white and not particularly showy to humans) on separate plants, the technical term for which is dioecious. So in order to have the striking red fruit, you will need to have a male plant in the vicinity. Generally one male is good for pollinating six to ten females, ideally planted within fifty feet of them.

(While we are on the topic of technical terms, winterberry fruit are called drupes by botanists because they have a single seed with a hard shell inside, like apricots and cherries. True berries, on the other hand, contain seeds in soft flesh, like blueberries and currants.)

Winterberry fruit ripens in late summer or fall and is eaten by over 48 species of birds, including Cedar Waxwing, American Robin, Gray Catbird, Northern Mockingbird, Wood Thrush during fall migration, and Eastern Bluebird. Both male and female winterberry are larval hosts for the Henry’s Elfin butterfly and, when in bloom, attract other pollinators. All hollies support the specialist cellophane bee (meaning this bee relies on the Ilex genus exclusively) Colletes banksi.

The dark-green leaves are not known for fall color but sometimes will turn maroon before they drop. Rabbits and deer will browse the foliage, a good reason to plant winterberry in groups (or simply allow it to sucker into a colony) so as to lessen the foraging burden on individual plants. Bonus: the natural tendency of winterberry to form thickets provides good nesting habitat for birds. 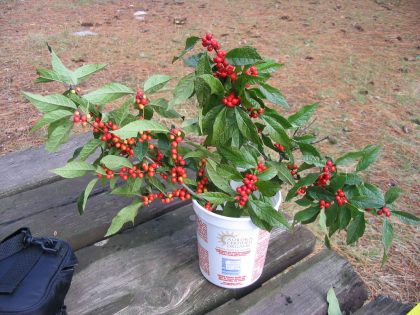 Try to avoid cultivars with yellow or orange fruit. The straight species of native winterberry in its male and female forms are the best options for wildlife-friendly gardens. Photo courtesy of the North Carolina Extension Gardener.

Typically I avoid discussing cultivars (a portmanteau of “cultivated varieties,” that is, plants selected and bred by horticulturists for certain desired traits), because the straight species of native plants are usually considered to be the most valuable to wildlife.

However, winterberry has been bred into dozens of cultivars, some of which best pollinate only some of the others, and it’s quite difficult to find the straight species in the typical garden center. You will know that a plant is a cultivar when its label includes a name in single quotes, e.g., Winterberry (Ilex verticillata) ‘Winter Red.’ Sometimes the growers will helpfully include a note on the label as to which other cultivar is a good match.

Try to avoid cultivars with yellow or orange fruit — such color divergence from native types is thought to result in fruit less palatable to birds or of lower nutritional value.

The straight species of native winterberry in its male and female forms are the best options for wildlife-friendly gardens. Some of us, though, have small gardens that can’t accommodate large shrubs — so don’t feel guilty about buying smaller cultivars.

Winterberry can be planted in many different conditions, from part shade to full sun, and from soaking wet to pretty dry. However, it prefers moist, acidic, organic loamy soils.

My “Winter Red” (until recently happily married to “Southern Gentleman”) is located in a somewhat dry spot in my garden. She had flourished and produced lots of fruit for years until this one, when nary a berry (sorry, drupe) appeared. Thus I was fascinated and saddened to learn while researching this article that drought, which was severe and prolonged in Connecticut this summer, can cause fruiting failure in winterberry. Sometimes we learn the lesson “right plant, right place” the hard way.

Many experts recommend planting winterberry in masses but, as noted earlier, it can actually be a wonderful specimen in a moist location. Consider it also for a shrub border, an edge planting for woods or meadow, a rain garden, or as part of the frame around your lawn, complemented by lower-growing native perennials or ferns in front, and taller native trees in back.

As always, I love to hear from readers with your questions or comments. homegrown@ctaudubon.org.