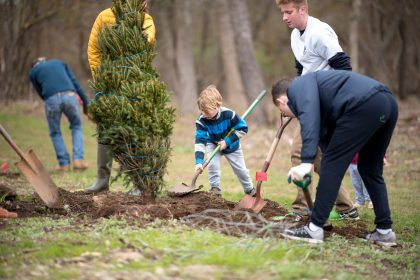 Volunteers have done an amazing job in helping to restore the Smith Richardson preserve.

Directions, via Google Map: Signs on Sasco Creek Road indicate each of the preserve’s three parcels.

This sanctuary consists of three parcels: A 24-acre Christmas tree farm, a newly restored 14-acre field habitat, and a 36-acre evergreen plantation that has been completely restored to native wildlife habitat.

With the help of scores of volunteers, donations, and a major grant from the Long Island Sound Futures Fund, the Connecticut Audubon Society has transformed the 36-acre section, until recently choked with weeds, into a thriving sanctuary for birds, pollinators, and native plants.

The matching funds allowed Connecticut Audubon to plant more than 3000 native trees and shrubs chosen for their value to birds and other wildlife, and to create two two-acre pollinator meadows.

Many acres of invasive plants and vines that have far less value to birds and insects have been removed, and trails have been restored, allowing visitors to access this remarkable restoration site. Public information signs describing the habitats created here as well as the value of native plantings have been established.

Ongoing efforts here include invasive monitoring and removal, deer fencing, and irrigation as well as maintaining the hundreds of native plants and trees that are now providing food and cover for a myriad of migratory and resident birds and wildlife.

Description and species
Widely known as a wonderful birding location in fall and winter, the preserve now offers a great variety of species year-round.

In early spring at the tree farm, visitors stand a good chance of finding American Woodcock here. At dusk you might witness the amazing courtship flight of the male. The Christmas trees can host a surprising number of Song Sparrow, Gray Catbird, and other species that nest right in these growing evergreens.

The most notable part of the fall season is the terrific sparrow migration: Song Sparrow, Field, Savannah, White-throated, White-crowned, Swamp, and perhaps even a rare Clay-colored or Grasshopper Sparrow. There will likely be Eastern Towhee and Dark-eyed Junco present, as well as warblers like Yellow-rumped, American Redstart, and Palm. Other sightings often include Blue-headed Vireo, Eastern Phoebe, Winter Wren, Ruby-crowned and Golden-crowned Kinglets, and the rare Blue Grosbeak.

In winter the evergreens tend to be the stars of the show and the Christmas tree farm at times hosts rare birds such as White-winged and Red Crossbills. You may find a Brown Creeper in the cold and snow along with Yellow-bellied Sapsuckers and perhaps a Red-breasted Nuthatch.

August 2018
A paradise for birds and bugs

September 2016
Jerid O’Connell on why Smith Richardson is important