Connecticut State of the Birds 2012: Where Is the Next Generation of Conservationists Coming From? 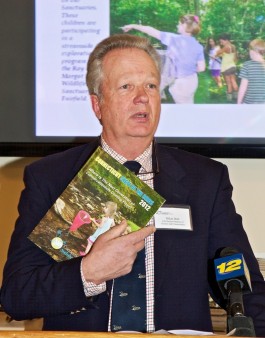 February 10, 2012 – Concerned with the dwindling amount of time kids are spending outdoors and its implications for the future of conservation, the Connecticut Audubon Society said today that it is increasing its emphasis on outdoor environmental education for young people and called on its partners in government, education and the environment to collaborate on the endeavor.

Connecticut Audubon Society has been providing high quality environmental education since its founding in 1898. But based on the findings of its Connecticut State of the Birds 2012 report, titled “Where Is the Next Generation of Conservationists Coming From?” CAS will concentrate in 2012 and beyond on creating more outdoor educational opportunities with more partners for more children.

The goal is to help create a deeper, long-term commitment to conservation, as well as contribute to the health and academic success of our state’s children.

“Connecticut Audubon Society has been conserving the state’s important habitats for more than a century. We’re in it for the long haul,” said CAS President Robert Martinez. “That’s why we’re looking to the future of habitat conservation with some concern.

“Our children are spending less time out of doors. Their off hours are highly structured and they have little opportunity for spontaneous interactions with the natural world. If we don’t start to counteract that, the great conservation achievements of recent decades will be threatened.”

To help draw public attention to the issue, CAS will hold a series of round-table discussions this spring at four of its regional centers (in Glastonbury on March 14, in Fairfield on April 12, at Milford Point on May 3, and in Pomfret on May 10). Each discussion will feature a panel of local experts including educators, parents, students and other stakeholders.

[Read the Final Report from the forums here.]

Connecticut Audubon will put additional staff resources into its support for the state Department of Energy and Environmental Protection’s No Child Left Inside program. Among the joint projects, CAS will work with the No Child Left Inside staff to organize a celebration for the 20th anniversary of International Migratory Bird Day, in May.

We are very pleased that Susan Frechette, Assistant Commissioner of the state Department of Energy and Environmental Conservation, joined us today for the report’s release, as did Fairfield First Selectman Michael Tetreau.

We are making a special effort to reach out to the education community and are happy that we were also will  joined by Pamela Iacono, chair of the Fairfield Board of Education; Len Tavormina, headmaster of the Eagle Hill School, in Southport; Gary Rosato, Director of Curriculum, Instruction and Assessment for the Fairfield public schools; and Julia Serrano and Neyra Benoit, Bunnell High School (Stratford) students.

Also joining us today were Amanda Flanagan, chair of the John Patrick Flanagan Foundation, and Tony Vogl, Director of Development and Marketing, the Connecticut Yankee Council of the Boy Scouts of America.

To read a PDF of the report, click here. To receive a copy of the report in the mail, become a member of Connecticut Audubon Society.