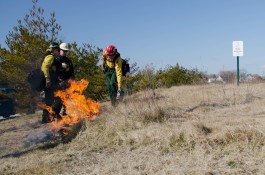 February 2012 – As part of our ongoing work to restore the coastal habitat at Stratford Point, Connecticut Audubon Society collaborated with the Connecticut Department of Energy and Environmental Protection to carefully burn about 20 acres of the Point’s grassland on Tuesday, February 28.

The prescribed burn was designed to get rid of invasive plants and remove the build-up of decaying, nutrient-rich vegetation, which will help native grasses and wildflowers to flourish, and reduce the risk of wildfires. The practice mimics the periodic fires that occurred in the northeast in pre-Colonial times when Native Americans burned grasslands and woodlands to manage habitat for game, and when lightning strikes caused occasional natural fires.

Overseen by a crew of 13 from the DEEP’s Forestry Division, the prescribed burn was actually a series of sequential fires set by using drip torches fueled by diesel and gasoline, and controlled using water hoses, rakes and rubber mats.

The burn had been planned for more than a year and included meetings with and notifications to neighbors in the adjacent Lordship neighborhood of Stratford. After we secured our final permits in late February, the DEEP monitored weather and air quality forecasts to find a a day with suitable, safe conditions.

At a briefing for the crew and observers before the burn started, DEEP staff said that with the temperature at 45 degrees, the relative humidity 37, and the winds at zero to 10 knots, the day was close to ideal. Most importantly, winds were from the north-northwest, which meant the fire would progress away from neighboring houses and the smoke would be blown over Long Island Sound.

The Point sits at the mouth of the Housatonic River, in the midst of an area that is extremely varied and productive ecologically. The Housatonic estuary itself is rich with fish and shellfish. Nearby are the 699-acre Great Meadows salt marsh in Stratford, the 840-acre Charles B. Wheeler Salt Marsh in Milford, and Milford Point. Connecticut Audubon Society’s Coastal Center at Milford Point provides access to an extensive network of beach habitat and mudflats. 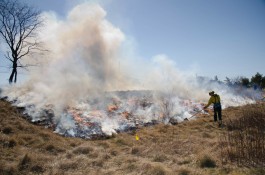 But for most of the 20th century Stratford Point was damaged goods. Long the site of the Remington Arms Gun Club, it was contaminated with lead shotgun pellets and was the subject of an extensive cleanup funded by the DuPont Corp., which owns the Point. In 2001, DuPont protected Stratford Point with a conservation easement, held by the DEEP; Connecticut Audubon Society has an agreement with DuPont to oversee, manage and restore the property.

We’ve been working with ecologists from Sacred Heart University and Yale Peabody Museum to design and carry out a plan that will restore Stratford Point as an important piece of the mosaic of ecosystems that surround it. Most recently, we finished construction of 900 linear feet of man-made dunes along the Point’s north cove – the first time a habitat restoration project of that kind has been attempted in Connecticut.

The dunes will provide important new habitat for birds and other wildlife and also help prevent the point from eroding away, a serious concern at a sanctuary that has seen the shoreline recede by 100 feet over the last decade. The restored coastal grassland will help complement the dune project.

We believe our work at Stratford Point constitutes the most comprehensive ecological restoration project currently being carried out on Long Island Sound.

We would like to thank the many partners and funders we’ve worked with over the years on the Stratford Point project: the DuPont Corp.; the Connecticut DEEP; Sacred Heart University; the Yale-Peabody Museum; The Nature Conservancy; the Long Island Sound Futures Fund; the U.S. Environmental Protection Agency; and the National Fish and Wildlife Foundation.