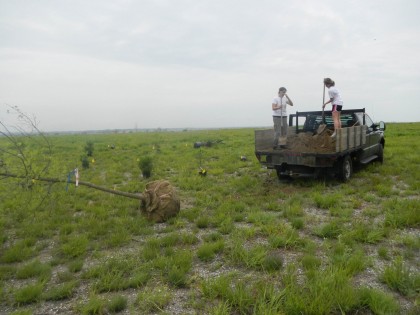 May 2012 – Connecticut Audubon Society, in collaboration with Sacred Heart University, has completed the next important phase of the one-of-a-kind coastal habitat restoration project at Stratford Point, planting 96 native trees and shrubs to increase foraging, roosting and nesting opportunities for migratory and breeding birds and other wildlife.

Using a tractor and an array of hand tools, CAS staff along with faculty and graduate and undergraduate students from Sacred Heart planted the trees and shrubs on on a muggy Monday, May 14, and then surrounded the plantings with deer fencing.

The work followed two earlier phases that together are the heart of a longer-term project to transform Stratford Point from a hazardous waste site to a vibrant preserve that complements the mosaic of diverse habitats at the mouth of the Housatonic River. We believe it is the most comprehensive habitat restoration project currently underway in Connecticut or on the Sound.

Late last year, workers and volunteers built 900 linear feet of man-made dune, complete with 38,000 individual dune grass plants, along the point’s north cove. And then in February, the state Department of Energy and Environmental Protection pitched in by conducting a controlled burn on 20 acres of the point, reducing the build-up of dead vegetation and preparing the way for a resurgence of native grasses and wildflowers.

A Rich Ecological Area
With its position on the lower Housatonic, Stratford Point is in one of the richest areas, ecologically, in Connecticut and on Long Island Sound. The Housatonic estuary itself teems with fish and shellfish. Flanking the river are the 699-acre Great Meadows salt marsh in Stratford, the 840-acre Charles B. Wheeler Salt Marsh in Milford, and Milford Point (Great Meadows and Milford Point are part of the Stewart B. McKinney National Wildlife Refuge; Wheeler Marsh is state-owned). Connecticut Audubon’s Society’s Coastal Center at Milford Point provides access to an extensive network of beach, dunes, marsh and mudflats. 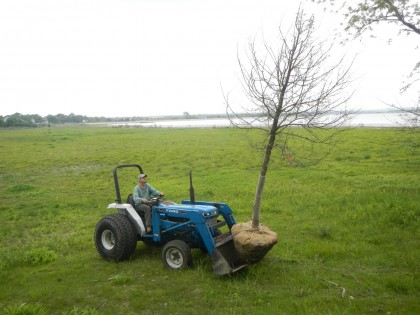 The hope is that Stratford Point, which comprises 28 acres of upland habitat and 12 acres of tidal area, will become as biologically diverse as Milford Point, which will significantly increase the amount of first-rate coastal habitat on the Sound.

Even now, with the work still fresh and long-term monitoring just starting, the change at Stratford Point is remarkable.

For most of the 20th century Stratford Point was the home of the Remington Arms Gun Club. Decade after decade of skeet and trap shooting left it and the surrounding marshes contaminated with lead shotgun pellets. The DuPont Corp., which now owns the land, funded a cleanup and preserved the point forever with a conservation easement held by the state DEEP. It also contracted with Connecticut Audubon Society to oversee, manage and restore the property.

Eight Kinds of Shrubs and Trees
They chose eight species: Red bearberry (Arctostaphylos uva-ursi), Eastern red cedar (Juniperus virginiana), Serviceberry/shadbush (Amelanchier canadensis), Southern arrowwood (Viburnum dentatum), Hackberry (Celtis occidentalis), Northern bayberry (Myrica pensylvanica), Beach plum (Prunus maritima) and Staghorn sumac (Rhus typhina). Most of the specimens were small and relatively easy to plant but seven weighed as much as 600 pounds and required a tractor to get into the ground. The trees and shrubs are all native to the area, are likely to thrive on the site because they are tolerant of the salt spray and other harsh conditions of the area, and will provide food and cover for a variety of wildlife. 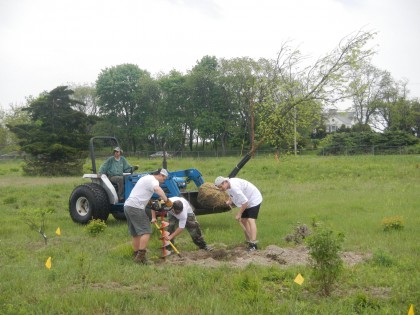 Mike Stocker, David Mandeville and Michael McCain, all from Sacred Heart, plant one of the 96 trees and shrubs.

The next step, to be taken in early summer, is to create several small hills and dips in the otherwise flat terrain at the point, and add a small, seasonal freshwater pond, to diversify the habitat. In conjunction with Sacred Heart University, we will embark on a long-term monitoring process, to assess the restoration work and see how it compares to the established habitat at Milford Point.

The work was funded by grants from the Connecticut Corporate Wetlands Restoration Partnership and the Connecticut Ornithological Association. Other parts of the Stratford Point work have been funded by DuPont, the the National Fish and Wildlife Foundation’s Long Island Sound Futures Fund, and The Nature Conservancy.