Pesticides, Continued: Butterfly Decline Linked to Use of Roundup 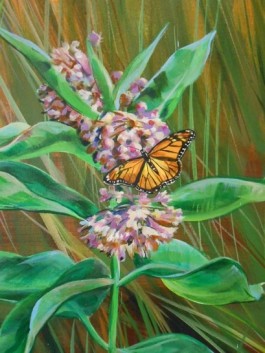 A monarch and milkweed, shown in this detail from a mural at our Pomfret Center, painted by Amy Bartlett Wright

The number of monarch butterflies that overwinter in Mexico dropped this year, by an estimated 59  percent, which drew the attention of news outlets last month. It will surprise no one that a key suspect is pesticides, especially Monsanto’s Roundup, which is used to kill milkweed on midwestern farms.

Monarchs depend on milkweed, which grows among the corn and soybeans. Farmers now use Roundup, the active ingredient of which is glyphosate, to kill milkweed and increase their crop yields. The crops they are harvesting are so-called Roundup ready, which means they’ve been genetically modified to survive glyphosate.

The result? The agricultural use of glyphosate has tripled over the last 16 years.

I learned that in Yale Environment 360, the online journal of the Yale School of Forestry and Environmental Science, which published an interview earlier this month with insect ecologist Orley R. “Chip” Taylor, of the University of Kansas, who has been working on monarch conservation.

Here’s an excerpt from the introduction to the interview:

“Monarchs are beloved for their spectacular migration across Canada and the United States to overwintering sites in central Mexico — and back again. But a new census taken at the monarchs’ wintering grounds found their population had declined 59 percent over the previous year and was at the lowest level ever measured.

“In an interview with Yale Environment 360 contributorRichard Conniff, Taylor — founder and director of Monarch Watch, a conservation and outreach program — talked about the factors that have led to the sharp drop in the monarch population. Among them, Taylor said, is the increased planting of genetically modified corn in the U.S. Midwest, which has led to greater use of herbicides, which in turn kills the milkweed that is a prime food source for the butterflies.”

He asked Taylor to describe the situation in the United States. Here are Taylor’s answers:

“What we’re seeing here in the United States is a very precipitous decline of monarchs that’s coincident with the adoption of Roundup-ready corn and soybeans. The first ones were introduced in 1997, soybeans first, then corn. By 2003, 2004, the adoption rate was approaching 50 percent, and then we really began to see a decline in monarchs. And the reason is that the most productive habitat for monarch butterflies in the Midwest, in the Corn Belt, was the corn and soybean fields [where milkweed, which monarchs feed on, grew]. Before Roundup-ready crops, weed control was accomplished by running a tiller through those fields and chopping up the weeds and turning over the soil, but not affecting the crops. The milkweed survives that sort of tillage to some extent. So there were maybe 20, 30, 40 plants per acre out there, enough so that you could see them, you could photograph them.

“Now you are really hard pressed to find any corn or soybeans that have milkweed in the fields. I haven’t seen any for years now because of the use of Roundup after they planted these crops. They have effectively eliminated milkweed from almost all of the habitat that monarchs used to use.

“e360: The amount of herbicide sprayed on these fields has gone up?

“Taylor: Oh, yes, it’s gone up. The glyphosate used in agriculture has tripled since 1997, when they first introduced these Roundup-ready crops. The developers of these crops not only provided the seeds that were glyphosate-resistant, but they also provided the glyphosate — the Roundup. And, boy, that was a pretty good system. You could make money on both, right?”

Monsanto touts its Roundup ready “system.” Here’s what the company’s website says: “Developed in 1974, Roundup® brand agricultural herbicides continue to be a perfect fit with the vision of sustainable agriculture and environmental protection.”

To be clear, in Monsanto’s view, poisoning milkweed is good for sustainable agriculture and environmental protection. For monarch butterflies, not so much.

A number of pesticide bills were introduced in the Connecticut General Assembly in Hartford this year. None seem likely to pass. Instead, legislators want to create a task force to study the pesticide issue.

Pesticides have always been a concern to Connecticut Audubon Society. We are concentrating on the issue now because of the findings of our Connecticut State of the Birds 2013 report, which documented the long-term population decline of 17 species of native birds that eat only insects they catch on the wing – so-called aerial insectivores.

It will surprise no one that a key suspect is pesticides. Connecticut Audubon Society will continue to work for stronger pesticide regulations and a reduction in pesticide use. – Tom Andersen, director of communications and community outreach