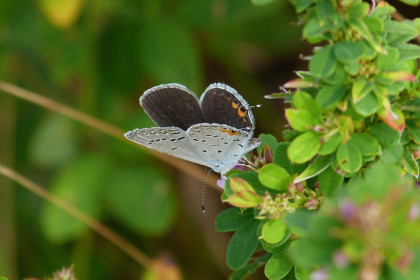 Scientists in Massachusetts are conducting a fascinating climate change study using baseline data collected in the mid 1800s. It caught my attention because the data have led the researchers toward a speculative hypothesis that reminded me of something similar in our recent Connecticut State of the Birds 2013 report.

It also caught my attention because the data from the 1800s consist of records of the first blooming dates of spring wildflowers, recorded by Henry David Thoreau.

Thoreau was as steadfast in those observations as today’s birders are in noting the comings and goings of birds. He wrote somewhere (I’m working from memory here) that if he fell asleep and woke up in spring he would know the date by which flowers were in bloom.

“Many of the species Thoreau saw have disappeared from the Concord area, but by studying 32 spring-flowering native plants from a variety of habitats, the modern researchers have discovered that they are now flowering much earlier. On May 11, 1853, for example, Thoreau noted the blooming of the highbush blueberry (Vaccinium corymbosum), now the most widely grown blueberry for commercial use in North America and, with its distinctive white, dangling, bell-shaped blossoms, an easily identifiable plant. If Thoreau were to search for it today in mid-May, he’d be out of luck, since it now flowers during the last two weeks of April. After the very warm winter of 2011-12, he would have missed it by a good six weeks. Last spring, its appearance in Concord was recorded on the first day of April.

“Matching Thoreau’s lists with temperature records kept for over a century by the Blue Hill Meteorological Observatory in Milton, Mass., Primack [the lead researcher, Richard Primack, of Boston University] and his associates have determined that plants in Concord are reacting to warming temperatures by flowering roughly two days earlier for each degree increase in temperature. In Thoreau’s time, the average spring temperature was 42 degrees and the average date of first flowering of the 32 species in the study was May 15. For the years 2004-12, it has changed by 11 days (to May 4) and by 6 degrees (to 48 degrees).”

The area, Primack says, is “a living laboratory for climate change.” Wulf writes: 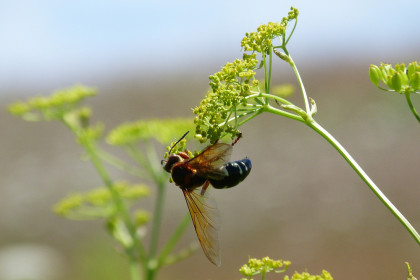 “By studying Thoreau’s records, Primack and his colleagues are trying to find ways to predict how plant communities may react to climate change. It is now clear that certain plants are affected more strongly by rising temperatures than others. Flowering times for early-­season plants are shifting more sharply than those of late-season plants. And there might be more changes to come. The alterations in flowering times may also affect pollinators associated with specific plant species. More research needs to be done, but one hypothesis suggests that some plants might now be maturing too early for the breeding cycle of their specialist pollinators, with results that could be ruinous to both.”

It was the latter two sentences that made me think of Connecticut State of the Birds 2013. Titled “The Seventh Habitat and the Decline of Our Aerial Insectivores,” the report described how 17 species of birds native to Connecticut, and which eat only bugs they catch on the wing, are experiencing a population decline that is at least five decades in duration.

There are lots of possible causes, or combinations of causes, and of course climate change is among them. In the report, Jon D. McCracken, director of national programs for Bird Studies Canada, writes:

“ … perhaps there are subtle shifts taking place in the seasonal timing of insect emergence as a consequence of climate change. Even minor mismatches in the timing of seasonal cycles of birds and their insect prey have been shown to have important implications for bird survivorship and nesting productivity.”