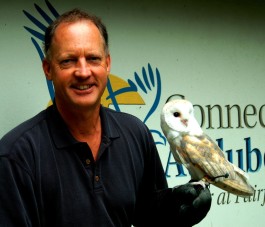 A skillful birder who is as comfortable scoping seabirds as he is in a meeting room, Brash will take on the task of continuing and expanding Connecticut Audubon Society’s many recent successes, including the delivery of first-rate educational programs, conservation-focused advocacy campaigns, and the sustainable management of its preserves.

Brash will start as president of Connecticut Audubon Society on September 9, taking over for Robert Martinez, who retired in late August after a decade as president of the organization.

Brash comes to CAS from his previous position as senior director for the northeast region of the National Parks Conservation Association, a non-profit that works to protect and support America’s national parks, where he had been since 2004. During his tenure there, he opened the Northeast Regional office, built a strong and diverse team, developed an impressive array of programs, and helped raise more than $40 million for the organization.

Previously he held positions with the New York City Department of Parks and Recreation, including as its chief ranger and head of its Natural Resources group.

A resident of Connecticut for much of his life, Brash has lived in nearly each corner of the state, and now resides in Riverside.

Founded in 1898, Connecticut Audubon Society is the state’s leading independent conservation organization. Brash will oversee a staff of 30.

With state headquarters in Fairfield, CAS operates five centers (Pomfret, Glastonbury, Fairfield, Milford Point and Birdcraft Museum in Fairfield); has an EcoTravel program based in Essex; and is overseeing a coastal habitat restoration project at Stratford Point.

Ralph T. Wood, chairman of Connecticut Audubon Society’s Board of Directors, said Brash comes to the organization with extensive regional experience and first-hand knowledge of Connecticut and its issues.

“The Board was unanimously enthusiastic about Alex,” said Wood, a resident of  Glastonbury. “We are counting on him to lead and guide our organization to even more achievements in our conservation, education, advocacy and EcoTravel programs, and to help our centers and sanctuaries retain their status and popularity among our members and visitors.”

Brash will lead the organization as it expands its three-pronged approach to conserving Connecticut’s birds and their habitats, focusing on education, conservation and advocacy.

“I am honored to be asked to lead Connecticut Audubon Society, an organization long known for its sanctuaries and its great work in environmental education,” Brash said. “I particularly look forward to working with its members, friends and its regional Boards to advance a progressive environmental agenda for the benefit of the state and its people.”

In education, Connecticut Audubon Society will offer its acclaimed curriculum-based outdoor program, Science in Nature, at Milford Point and Pomfret in 2014. Science in Nature was launched in the 2012-2013 school year at the centers in Fairfield and Glastonbury.

In conservation, the organization’s team of field scientists will continue to manage Connecticut Audubon Society’s properties and protect beach-nesting birds through the Audubon Alliance while providing conservation management services to a growing roster of landowners around the state.

In advocacy, CAS will continue to set a statewide conservation agenda through publication of its annual Connecticut State of the Birds report, and will work in Hartford on behalf of legislation that benefits conservation.

At the National Parks Conservation Association, Brash led the effort to re-envision Gateway National Recreation Area, and fought to protect Cape Cod, Minuteman, Acadia and numerous other parks from threats. He led NPCA’s involvement in the effort to launch a major new national park in Maine, forged strong ties among urban park allies, and has been the executive producer of such events as the biennial black-tie galas in New York City and Feel Free, the premiere of Ken Burns’s documentary in Central Park.

Before joining NPCA in 2004, Brash served as the chief of the Urban Park Service, including the Natural Resources Group, in New York City’s Parks Department, and prior to that he was the director of Management Planning. In these capacities he allocated the agency’s $350 million budget, lead a 500-plus person uniformed division, directed hundreds of special events, and managed the agency’s environmental agenda.

Prior to his work for New York City, he worked for the World Wildlife Fund and the Nature Conservancy. He has also edited and written a number of books and articles.

Married with two children, Brash has a B.S. from Connecticut College with Honors in Zoology and an M.F.S. from Yale University, and he loves to bird and fish in his free time.