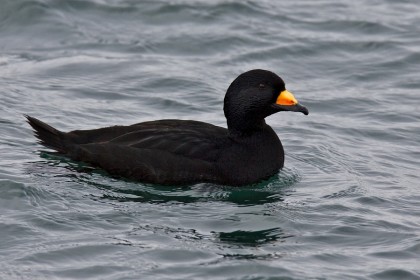 Where to find them: Black Scoters seem to be more prevalent this year than in recent years. They are rarely seen in fresh water but this week you can look for these unusual scoters inland, in areas such as the Connecticut River off Vibert Road in South Windsor and Bantam Lake in Litchfield along North Shore Road. You can also look for them on the coast, off Penfield Reef in Fairfield, off Reef Road, where there is public access (go at low tide). Black Scoters are uncommon but regular migrants. They breed in subarctic regions and winter in coastal areas along both coasts. Diving ducks (rather than dabblers like Mallards), they dive to find crustaceans and mollusks to eat.

What they look like: Black Scoters are small, stocky diving ducks slightly smaller than a Mallard but larger than a teal.  The adult males are all black with a yellow knob at the base of the upper bill. Juveniles and females are grey-brown with a dark cap and lighter cheeks.

How to find them: Look for small groups of diving ducks in open water off shore.  Scoters are not usually found in shallow waters near shore like Mallards and Black Ducks.

What if the birds aren’t there? Waterfowl of all sorts are moving through this week in large numbers. Almost anything could show up, but look especially for American Wigeon, Pintails, and Green-winged Teal among the Mallards and Black Ducks in inland waters, and Long-tailed Ducks and Surf and White-winged Scoters along the coast.

Conservation status: Black Scoters are listed as Near Threatened by the American Bird Conservancy.

To sign up for future Connecticut Bird Finder emails, send your name and town to tandersen@ctaudubon.org