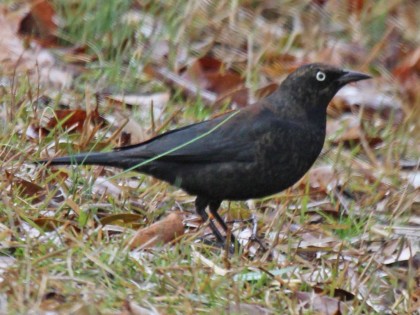 November 22, 2013
Where to Find It: Rusty Blackbirds are now seeking out their wintering range. They are not common but you can find them in Connecticut, mixed in as individuals in flocks of other blackbirds species, or as small flocks of up to 30-plus individuals.

How to Find It: Look for them in farm fields and wooded swamps, or even occasionally at backyard feeders. A few of our favorite locations are Hartford Audubon’s Station 43 Bird Sanctuary, in South Windsor; the Durham Meadows Wildlife Management Area and adjacent farmland-Coginchaug River floodplain complex in Durham; and the White Memorial Conservation Center in Litchfield.

With the onset of colder weather, they have switched from primarily an insect diet to one of seeds and berries. Most Rusty Blackbirds winter to our south and west, but you can find the occasional individual or small group lingering through winter. Your best chance at finding them is now when they are passing through in greater numbers.

What it Looks Like: Slightly larger than Red-winged Blackbird and significantly smaller than Common Grackle. Distinctive rufous-edged basic plumage in August through March is most prominent in the female but also noticeable in the male. At close distances, the eye’s pale iris contrasts with the surrounding dark feathering.

What if the Bird Isn’t There? The habitats in which you might find Rusty Blackbirds might also harbor other rare blackbirds, including Brewer’s Blackbird (longer-tailed and thinner-billed) and Yellow-headed Blackbird (look for the yellow). Also look for rare sparrows in the same seed-and-berry-covered habitats that blackbirds frequent.

Conservation Status: Rusty Blackbirds are declining fast, perhaps by as much as 90 percent over the last four decades, for reasons that are unclear. However it is not a listed species, either federally or in Connecticut. The wetlands they and other birds inhabit are not only excellent wildlife habitat but also provide important ecosystem services such as flood control and drinking water filtration. We urge Connecticut residents to support the protection and acquisition of wetlands in the state.

Ornithologists in New Hampshire are tracking Rusty Blackbirds and sent along this notice:

“If you have the good fortune to encounter Rusty Blackbirds this winter, please check their legs for bands.  Researchers from the International Rusty Blackbird Working Group have been banding adults and nestlings in breeding areas of northern New Hampshire since 2009.  Individuals may have a standard aluminum band only or an aluminum band and one or more color bands.  Even if you are unable to distinguish colors or read numbers, the mere observation of banded birds is very helpful. Please send information including date, details of location, and observed bands to Carol Foss at cfoss@nhaudubon.org.”


To sign up for future Connecticut Audubon Bird Finder emails, send your name and town to tandersen@ctaudubon.org