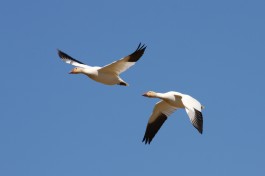 Where to find it: Snow Goose occurs each winter in Connecticut but only in limited numbers, unlike the massive flocks found on the Delmarva Peninsula and the rice fields of Arkansas.  A January 21 report of a single Snow Goose came from Hartford Reservoir 6 on Route 44, West Hartford. The bird was located at the far end of the reservoir, in with a flock of 300 Canada Geese. On January 24, two Snow Geese were reported in a cornfield across from the Weatogue firehouse on Route 10 in Simsbury, along with a few hundred Canada Geese. The person reporting said, “They soon lifted off and it looks like they headed for the Nod Road area. I see these geese frequently in the cornfield by the firehouse.”

How to find it: Locally, you can expect to typically find one or two birds mixed in with large flocks of Canada Geese. Most records are from inland sites – from farm fields or of birds resting on lakes. Agricultural fields are your best bet in winter when this Arctic nesting species moves to the south.

What it looks like: Snow Goose is a medium-sized goose, but does range in size from about 26 inches to 33 inches, making it significantly smaller than the largest Canada Goose but larger than a Cackling Goose. The silhouette of this bird will reveal a relatively thick-necked goose with a strong bill. Of course, an all-white goose will stick-out on Connecticut’s gray winter landscape, one of just a few birds of this size to tout all white plumage and black primaries. Snow Goose, like the smaller Ross’s Goose, does have a blue color morph, or form, which might make you think you are looking at another species altogether. To separate Snow from Ross’s, focus on the proportions of beak to head size where Ross’s is noticeably diminutive. 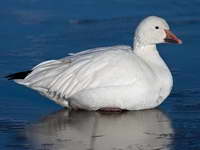 Be sure to check these goose flocks carefully as they historically have contained other unusual species including Pink-footed Goose, Cackling Goose, Greater White-fronted Goose, Barnacle Goose, and Northern Lapwing.

Conservation status: Hunting of Snow Goose has been allowed in many states since 1975 as a result of population recovery from the overhunting that took place prior to the 1916 ban. In some Arctic areas, the recovery has been so strong that habitat eutrophication has become an issue. Snow Geese are such efficient processors of vegetation that they can generate as many as 15 droppings per hour, a rate that is highest in birds foraging on high fiber rhizomes. This degradation of habitat not only compromises Snow Goose breeding success, but also that of some Arctic nesting shorebird species.