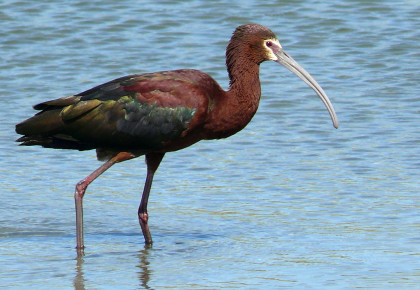 This week’s Bird Finder was written by Andrew Griswold, director of our EcoTravel program

Where to find it: White-faced Ibis, an uncommon visitor to Connecticut’s coast this month, is a colonial nesting species, building its nest in low shrubs and bushes. Its normal breeding range extends from the western United States south through all of Mexico, reaching as far south as southeastern Brazil, southeastern Bolivia, central Argentina, and along the coast of central Chile. Normal winter range extends from southern Gulf Coast states and California, south including its breeding range.

How to find it: Recently, and in the past, there have been reports of this species from Hammonasset Beach State Park in Madison. All the reports have come from the marsh east of the nature center parking lot, bordering the Cedar Island Trail.

There’s another report this week of a White-faced Ibis at Shell Beach in Guilford; birders who have seen it believe it’s a different bird from the one at Hammonasset.

What it looks like: Like the Glossy Ibis, the White-faced Ibis is a darkly colored wading bird of the salt marshes. Look for a bird about the height of a Snowy Egret, plodding along as it probes the mud below the marsh grasses with its long, down-curved bill.

The two ibis species can be distinguished by subtle differences in eye, face, and leg color. In all plumages, at close range or with a spotting scope, you should be able to see the red iris of the White-faced Ibis. Leg color of adult birds is noticeably brighter and a white border around a pinkish-red face is where this bird got its name. Additionally, bill color is gray as opposed to the brownish bill of the Glossy Ibis.

In non-breeding plumages, the two species are more alike but can be separated by somewhat muted field marks noted above. White-faced Ibis averages paler.

What if the bird isn’t there: Marsh habitats made-up of Spartina and grasses like Blackgrass and Spikegrass, are great places to look for many species including Marsh Wren, Saltmarsh Sparrow, Seaside Sparrow, and many members of the rail family. In the taller grasses, look for American and Least Bittern.

As an example of what else you may see, here’s an excerpt from the Connecticut Ornithological Association’s daily bird report from Wednesday evening, July 9, from Shell Beach in Guilford: “100 Snowy Egrets,16 Great Egrets, 46 Glossy Ibis plus one WHITE-FACED IBIS and two TRICOLORED HERON all feeding in a shallow pool in the middle of the marsh.”

Conservation status: With an estimated total population of 1.2 million individuals and increasing, noted in 2012, White-faced Ibis is considered to be of Least Concern by the International Union for Conservation of Nature. The bird is not uncommon throughout its range, but it is a not-so-common western visitor here in Connecticut. Enjoy!