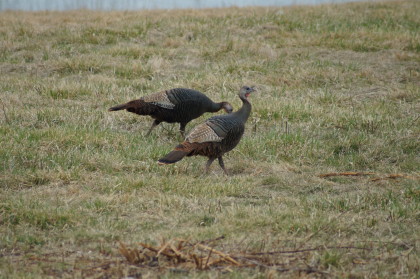 By Michael Aurelia
Wild Turkeys are large game birds whose natural habitats are North America’s mature hardwood forests, and adjacent, abandoned agricultural fields. Turkeys can also be found in pocket forest habitats in many of Connecticut’s suburbs and cities.

Although turkeys were abundant in Connecticut when colonists first arrived, their numbers quickly diminished from hunting, loss of forested habitat and a series of severe winters. By the early 1800’s turkeys had disappeared from Connecticut. Between 1975 and 1992, however, the Connecticut Department of Energy and Environmental Protection released more than 350 Wild Turkeys at 18 locations throughout the state. The result was one of the most successful restorations of an extirpated game species. Turkeys are now found in all 169 Connecticut towns.

What is looks like: As noted above, the Wild Turkey is a large bird with long, powerful legs, a long neck and large fan-shaped tail (as described by the Cornell Lab of Ornithology’s online Birds of North America). Its head and neck are mostly bare with only sparse feathering. Males, or toms, weigh between 15 and 25 pounds and measure 48 inches, while females, or hens, weigh between eight and 12 pounds and measure 36 inches. Toms are a dark brown to metallic color with an iridescence and brightly colored heads of blue, red and white in mating season. The tom also has a beard.

Where and How to Find It: Turkeys are relatively easy to find anywhere in Connecticut. This time of year turkeys can often be found in small flocks in forested habitats containing nut trees like oaks, hickories and beeches. To find birds close to your home go to eBird.org / Explore Data / Species maps, and then insert “wild turkey” and chose “year round / current year” and “CT” in the dropdown boxes. Then click on an orange or blue hotspot “drop.” 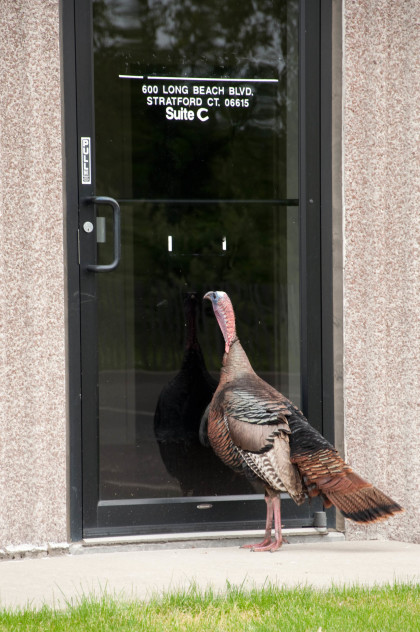 Other interesting facts: Although usually found on the ground, turkeys can fly. The daily range of a turkey can be more than several square miles.

The adult tom tracks are from 6 to 7 inches long.

Ben Franklin thought the national bird should have be the Wild Turkey because it is smart and wily.

Turkeys have the ability to adapt to different situations if food and shelter are available. Their excellent eyesight, hearing and strength are great survival skills.

The breeding season starts in late March or early April when the Toms begin gobbling and displaying for the hens. Hens can lay a clutch of 8 to 14 eggs in a ground nest. The hens are vulnerable to predators only when on the nest or when the poults are small and less that a few weeks old.

Conservation Status: The Wild Turkey is a game species that is hunted in Connecticut and elsewhere. Generally turkey can be hunted with firearms for a month in the spring and the fall. Bow hunting is also allowed in the fall for longer seasons. The bag limit for turkey is 1 to 3 individuals depending on the season, method of hunting and land ownership. In the spring of 2015 1,332 were harvested.

The return of the turkey to Connecticut has been remarkable and one of the most amazing wildlife management success stories. At this time the population of turkeys in the state is large and fairly stable. Finally if you would like to be a citizen scientist you can volunteer to help the CT DEEP with their annual turkey brood survey. You would record the number of hens and poults observed between June 1st and August 31st.

Photos by the Connecticut Audubon Society.