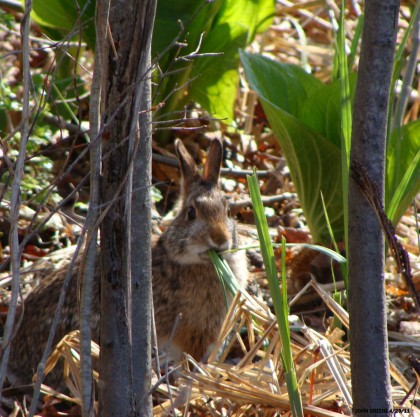 October 2015 – One of the region’s more elusive mammals, the New England cottontail is alive and apparently well at our Roy and Margot Larsen Wildlife Sanctuary in Fairfield, we learned recently.

That’s good news because more than 80 percent of the region’s New England cottontails have vanished in recent decades and the remaining population is being considered for listing under the Endangered Species Act.

The Larsen Sanctuary, which is contiguous to our Center at Fairfield (2325 Burr Street), is one of the few locations in Fairfield County with a confirmed population. And it turns out that they are long-term residents.

When he was a student at the University of Connecticut, in 1969, Milan Bull, now our senior director of science and conservation, trapped and released New England cottontails at Larsen as part of a college research project. In 2007, state wildlife biologists confirmed that they were still there.

Then last month, the state Department of Energy and Environmental Protection sent us the results of a survey from the winter of 2014-15: New England cottontails continue to live within the thickets and briar patches of the Larsen Sanctuary.

New England cottontails (Sylvilagus transitionalis) are indistinguishable in the field from their close relatives, the much more common eastern cottontail (Sylvilagus floridanus), which is not native to Connecticut. DNA tests are needed to confirm their presence. Biologists wait until there is snow on the ground and then collect rabbit droppings. Travis Goode of the DEEP said 12 samples were collected at Larsen last winter. Five were from New England cottontails and seven from eastern cottontails.

He said, “Their presence in ‘69, 2007 and last winter shows that you have a persistent population of rabbits. So that in itself is good.” 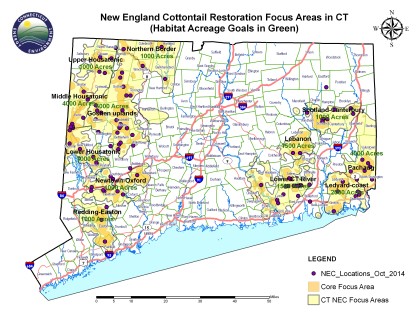 Goode said that while it is impossible to draw other conclusions from the data, in general good cottontail habitat – thickets of briars and other shrubs – will support one to two rabbits per acre, half New England cottontails and half eastern cottontails. The 155 acres of the Larsen sanctuary has about eight to 10 acres of rabbit habitat.

Goode said that the persistence of the population over almost 40 years indicates that there are no doubt other pockets of habitat and cottontails nearby.

New England cottontail populations have fallen for the same reasons as so many other species – habitat degradation and fragmentation. The scrub-shrub growth that the rabbits need has given way to forests and lawns; housing developments, strip malls, and highways have prevented rabbits in one patch from mating with rabbits in another. Some of our fastest-declining songbirds, including blue-winged warblers and chestnut-sided warblers, need the same habitat as New England cottontails.

The situation is less dire for eastern cottontails, which do just fine in suburban landscapes.

We also have a population of New England cottontails at our Richard G. Croft Memorial Preserve, in Goshen. We will be employing various management techniques to make sure the scrub-shrub habitat at both sanctuaries continues to thrive.