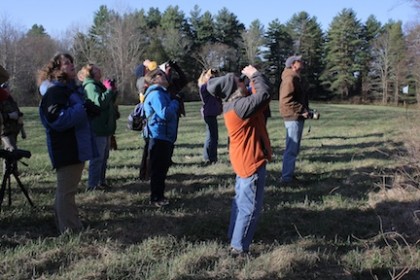 November 24, 2015 – The Connecticut Audubon Society along with with Massachusetts Audubon and the Audubon Society of Rhode Island have been awarded a U.S. Environmental Protection Agency grant to collaborate on an education initiative, called Building Climate Action Communities, designed to make climate change science a routine part of outdoor nature programs.

Climate change is already an important component of Connecticut Audubon’s award-winning Science in Nature school education program. The grant, for $69,632 divided among the three Audubon Societies, will help staff educators incorporate climate change science into their regular schedule of nature walks and programs for the general public. The Connecticut Audubon Society will implement the program at its Center at Fairfield and Center at Glastonbury.

The Connecticut Audubon Society, Massachusetts Audubon and the Audubon Society of Rhode Island are among the original environmental organizations in the country, with strong connections to their local communities and rich histories of environmental conservation and stewardship. All three are independent of and do not receive support or funding from the National Audubon Society.

“Awareness of climate change and how it is affecting the wildlife and natural areas we enjoy is absolutely essential to building support for action and learning how to adapt,” said Alexander Brash, president of the Connecticut Audubon Society. “People who take part in our hikes and bird walks will learn not only about bird migration, habitat diversity and wetlands functions but also about how climate change is affecting those areas and others.”

Among the many climate change impacts that concern conservationists are the timing of spring bird migration to the availability of insects for food, the change in the composition of forests as southern species replace northern species, the spread of invasive plants and pests, and the long-term viability of tidal marshes and undeveloped beaches.

The last example is of particular concern in Connecticut. Rising sea levels are expected to inundate tidal marshes, which are crucial habitat not just for birds but for fish, invertebrates and mammals. Because in Connecticut and elsewhere most of the land adjacent to marshes is developed, there is little room for marshes to expand and colonize higher ground as the water rises.

Among the birds that are likely to be extirpated from Connecticut as a result are Seaside Sparrow, Piping Plover, Roseate Tern, Saltmarsh Sharp-tailed Sparrow, and Black Rail.

The education reach of the three Audubon societies is large. Their combined base of members and supporters approaches 130,000, and over one million people visit their 28 nature centers and 150 sanctuaries and refuges. Tens of thousands of people attend their public programs and events annually.

Though operating independently, the three Audubons focus on similar conservation, education, and advocacy issues, and are leaders in their states on environmental issues, education, and policy.

Founded in 1898, Connecticut Audubon Society is the state’s original and independent Audubon society. The organization uses the charismatic nature of birds to inspire this generation of conservationists, and the next. Based in Fairfield, CAS conserves Connecticut’s environment through science-based education and advocacy focused on the state’s birds and habitats.