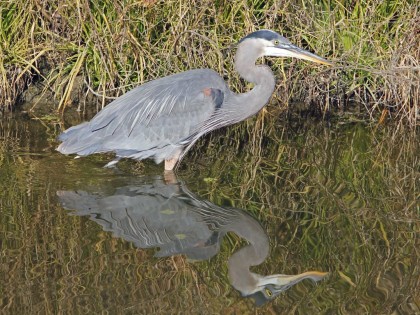 by Mike Aurelia
Connecticut’s waters are all free of ice this winter, which means that birds that need open water to forage are likely to be more common and widespread, including Great Blue Herons.

Their natural habitats are normally marine or freshwater environments of North America and adjacent agricultural fields or grasslands. The largest on all herons, these waders can be observed along all of Connecticut’s coastlines, rivers, lakes and ponds as well as most of the larger wetland habitats, though usually not in large numbers. Great Blue Herons can be found in all of Connecticut’s 169 Towns.

What it looks like: No other large wading bird looks like a Great Blue Heron. The Cornell Lab of Ornithology’s online “Birds of North America” describes it as a big bird with upperparts of the back and body gray; the fore-neck is streaked with white, black, and rust-brown. The head is mostly white with a wide blue stripe running from above the eyes to the back of the head. Its eyes are yellow, and the bill is yellowish. Its legs are brownish or greenish. Adults have distinctly white crowns, whereas juveniles are solid gray. Individual birds can be up to 63 inches tall and weigh up to 5 ½ pounds. When flying, the bird’s neck is in the shape of an S with legs extended along the body axis. Its wings beat slowly in flight.

Where and How to Find It: Great Blue Herons are relatively easy to find anywhere in Connecticut. The key is to find the nearest aquatic habitat, whether it is the shoreline of a river, lake or coastal waterbody. In the morning or at dusk, individuals or groups of birds can be found roosting on the nearest island. Though usually found on the ground, birds can also be discovered in shrubs and trees along the shoreline.

To find the nearest Great Blue Heron go to eBird.org and click Explore Data and then the Species maps function; insert “Great Blue Heron” as the species, “year round current year” as the date, and CT as the location. Zoom in and click on an orange or blue hotspot “drop.” You’ll notice that many of the sightings have been this month.

Other interesting facts: Although Great Blue Herons eat lots of fish, they can eat almost any animal they can swallow.  Prey also includes frogs, crabs, small mammals, birds, snakes, and insects.  Birds usually find food by slowly wading in shallow water or standing still. There also have been reports of individual birds fishing while floating in the water or standing on floating objects.

Nesting usually takes place in colonies but pairs have been observed nesting alone. Three to five greenish blue eggs are usually laid in a stick nest built in a dead tree or shrub. Occasionally, however, a few birds nest on the ground or concealed in a thick bed of reeds.  Although breeding pairs are mainly found in the northeast and northwest corners of the State, breeding can occur almost any area where there is appropriate habitat and food.

Conservation Status: According to Cornell’s “The Birds of North America,” Great Blue Herons were probably impacted by hunting for feathers, eggs and meat in the late 19th century. Subsequently, the loss of habitat and the impact from several industrial chemical contaminants like mercury and PCBs certainly reduced their numbers in the 1950’s through 1970’s. Since the 1970’s, however, it appears that Connecticut’s population of Great Blues has been stable or increasing slightly.