Connecticut State of the Birds 2015: Protect and Connect 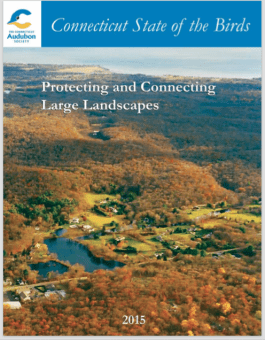 December 8, 2015 — The Connecticut Audubon Society today released its Connecticut State of the Birds 2015 report, “Protecting and Connecting Large Landscapes,” and called for an increased emphasis on habitat connectivity and land preservation to improve the chances of survival for many of the state’s fish, bird, reptile, and mammal species.

At a news conference at its Coastal Center at Milford Point, Alex Brash, president of the Connecticut Audubon Society, said Connecticut and its municipalities need a long-term, steady source of funding for land conservation and a well-formulated and prioritized plan to spend it wisely. The report recommends $500 million just to meet the state’s government’s portion of the land acquisition goal.

“Connectivity is a critical goal in conserving all these benefits. We believe it should become a top priority. Conservation projects as varied as acquiring degraded parcels, funding easements, and removing dams that inhibit the movement of species -– along with buying and preserving large tracts — all serve to re-open much larger areas, re-unite disconnected populations, or restore critical ecosystem components.”

It details a number of successful efforts in Connecticut, New England and internationally to ensure that biological connections stay unbroken and to reconnect habitats that had become separated.

Among them is work by the Highstead Foundation and the Harvard Forest to bring together landowners so they can collaborate on regional conservation plans, to conserve the unbroken habitats that birds such as ruffed grouse and wood thrush, and reptiles such as the spotted turtle, for instance, need to survive in the region.

Those regional conservation plans include the Hudson to Housatonic Conservation Initiative, which includes owners of woodland tracts in western Connecticut and adjacent eastern New York.

Other reconnection work includes projects by The Nature Conservancy and others to restore the free flows characteristic of the region’s rivers.

Also participating in the news conference were Rob Klee, commissioner of the Connecticut Department of Energy and Environmental Protection; Diana Atwood Johnson, chair of the Connecticut Natural Heritage, Open Space and Watershed Review Board; and Sally Harold, director of River Restoration and Fish Passage for the Connecticut Chapter of The Nature Conservancy. All three are authors of articles in this year’s report.

The report uses as a focal point both the official state goal of protecting 21 percent of the land in Connecticut by 2023, and the Department of Energy and Environmental Protection’s new Green Plan, its comprehensive open space guide, which is currently being revised.

For the state alone to reach its part of the goal, it would need to acquire about 8,000 acres a year through 2023.

Milan Bull, senior director of science and conservation for the Connecticut Audubon Society, said the organization is calling on Connecticut’s elected officials and conservationists to begin a campaign to authorize and approve a statewide land preservation bond act, or some other appropriate form of long-term conservation financing, as has been done in many states.

Until then, the General Assembly and the Governor should increase the annual bonding for land acquisition and, just as importantly, spend the money.

“The large landscapes that are essential for the well-being of our environment are getting sold, broken-up, disconnected and developed, to the detriment of all creatures, human and wildlife, that live in Connecticut,” Bull said.

“We hear it all the time: we can’t acquire conservation land now because the economy is weak, because prices are too high, because we’re having budget problems. The knee-jerk reaction is that there’s never a good time to conserve land, and the result is that despite the occasional triumphs, we are losing opportunities.”

The report’s other recommendations are: