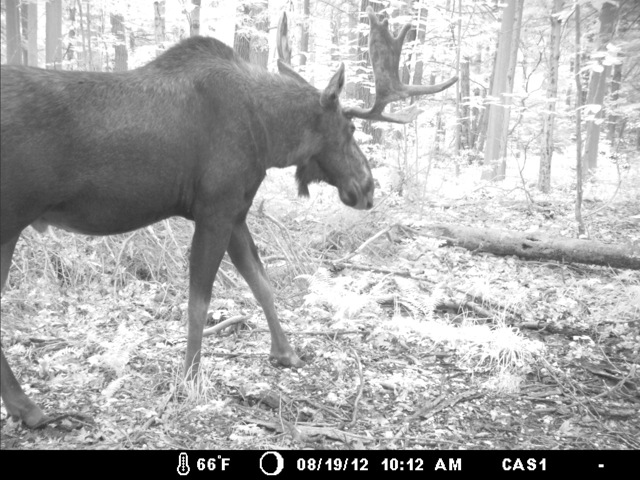 We photographed this moose at our Croft sanctuary in Goshen, using a trail camera. Moose, just now becoming established in the state, may be vulnerable to climate change.

December 1, 2015 – With negotiators gathering in Paris to work on agreements to lower carbon emissions, the Connecticut Audubon Society warns that climate change is already here and having a dramatic effect on the state’s wildlife, and predicts significant drops in vulnerable nesting birds as well as the loss of mammals and fish that have recently become re-established.

Connecticut Audubon Society, the state’s original and still independent Audubon, highlighted six at-risk species, notable for their prominence, vulnerability, or the amount of effort spent in recent years restoring them to the state. Most are relatively rare in Connecticut (and several are threatened or endangered on the federal level) but even the Black-capped Chickadee, common and well-known at backyard feeders, may be vulnerable to temperature alterations.

“These iconic but vulnerable animals are likely to be gone unless we can work together at both a local as well as global level to moderate warming and slow sea-level rise,” said Alexander Brash, president of the Connecticut Audubon Society, “and in Connecticut we need to better manage our habitats, increase connectivity, and find adjacent lands for marshes and beaches to expand.”

Saltmarsh Sharp-tailed Sparrow — UConn Ornithology Professor Chris Elphick notes of Saltmarsh Sharp-tailed Sparrows: “The species is expected to be among the first birds to go extinct due to sea-level rise.” Endangered in Connecticut, Saltmarsh Sparrows nest only in salt marshes, which are among the state’s most important habitats and are also likely to be inundated by rising sea levels. As Shimon C. Anisfeld of the Yale School of Forestry & Environmental Studies points out, the future of Connecticut’s marshes lies with their ability to retreat as sea level rises. That is a particular problem in Connecticut because the inner shoreline in most coastal areas are heavily developed, leaving little room for marshes to migrate.

Black-capped Chickadee — A favorite among the millions of people who maintain backyard bird feeders, the Black-capped Chickadee is unlikely to disappear anytime soon. But as temperatures change, its range and the range of a closely-related southern species, the Carolina Chickadee, are shifting north, according to a recent study by Cornell University and Villanova University. A small border zone where the two species hybridize is moving northward at a rate of 0.7 miles a year, and has advanced almost as far north as New York City.

Moose — Connecticut’s moose population of 100 to 150 animals is small but growing. However the U.S. Fish and Wildlife Service reports that as winters become milder with less snow cover, moose ­–- especially calves — become more vulnerable to ticks year-round, which can cause immune diseases.

Atlantic Salmon — For years, state fisheries experts engaged in an effort to restore salmon to the Connecticut River and last year shifted their focus to maintaining the current stocks in the watershed, including the Farmington and Salmon Rivers. A cold-water species, salmon can be expected to decrease and then disappear as river temperatures rise.

Piping Plover — Piping Plovers nest only on wide, sandy, and undisturbed beaches. In recent years there has been a total of only four to five dozen nests scattered between Stonington and Greenwich, including several at the Connecticut Audubon Society’s Coastal Center at Milford Point. Piping Plovers nest above the high tide line. Rising sea levels and bigger storms, however, will cause higher high tides that will wash away nests, eggs and nestlings.

Roseate Tern -– This beautiful rare and endangered species requires undisturbed islands and in Connecticut nests only on Faulkner’s Island, off Guilford. The island, part of the Stewart B. McKinney National Wildlife Refuge, is at risk of severe erosion as sea level rises and stronger storms abound.

Slowing the rise of global temperatures, mitigating the worst impacts of climate change, and adapting to the alterations that global warming will bring requires a combination of large-scale actions on the part of governments and corporations, and smaller-scale individual actions.

In Connecticut, for example, a concerted effort is needed among state and local governments, private conservation organizations, and individual landowners to find, acquire, protect, and properly manage remaining parcels of undeveloped land that tidal marshes can expand onto.

Professor Anisfeld of Yale, for example, points out that a section of Sherwood Island State Park, in Westport, that is regularly mowed as lawn is showing signs of having marsh salinity and marsh plants. With changes in management, that area could perhaps become a new section of tidal marsh.

Collectively though we can all do a lot. What you might ask?