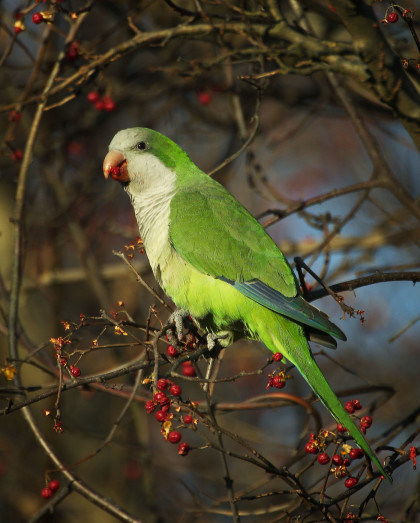 When we first heard earlier this year that Bald Eagles seemed to be trying to nest near the West River in New Haven, the initial report was that they had commandeered a Monk Parakeet nest.

Which prompted the question among many: Parakeets? In Connecticut?

Kathy Van Der Aue, a member of our Fairfield Regional Board and president of the Connecticut Ornithological Association, explains.

Monk Parakeet
Myiopsitta monachus
Why do we have wild parrots in Connecticut? How did they get here? How can they live through our winters? These were the questions I had when, in 1975, I saw my first green parrot happily eating grass seed with a flock of House Sparrows in Black Rock, a district of Bridgeport.

Urban legends abound on the question of how they got here. These parrots, known as Quaker Parrots in the pet trade, are imported from temperate regions of South America. One persistent theory is “the dropped crate at Kennedy Airport,” another “the truck accident on I-95 in New Haven.” (Editor’s note: the urban legend we remember is that they arrived on one of the many banana boats unloading in Bridgeport Harbor.)

None of these can be independently verified. Because Monk Parakeets are concentrated along our coastline, from the New York border to Old Lyme, there may be some credence to these stories that they escaped from accidents at transportation hubs like Kennedy. They are noisy pets and perhaps irresponsible pet owners grew tired of the constant squawks and released them outside.

As to the question of how they survive our winters, we look to the type of nest they build and where they live in South America. They are birds of the more temperate regions (not the tropics) living at altitudes of up to 6,000 feet in elevation, and therefore can survive quite well in cooler regions.

Another factor in their success in sub-freezing temperatures may be their nests. While other parrots nest in cavities, the Monk Parakeets build huge stick nests in which each pair has an “apartment” where they roost together. This insulation may help them survive even sub-zero temperatures. These stick nests have proven to be a problem when they are built on electric poles as they can cause short circuits.

What they look like: A medium sized green parrot with a gray face and chest, about 18 inches long, having a wingspan of 20 inches. They live for up to 20 years and form monogamous pairs, laying up to eight eggs in a clutch. They eat fruit and seeds and will frequent bird feeders in the winter.

How to Find Them: Their populations are heavily concentrated along the shoreline with scattered reports inland as far as Hartford. Look for the large nests and listen for their squawks. While locations can’t be guaranteed, they have been seen recently on the grounds of Fairfield University, in downtown Milford, West Haven and the Long Beach area of Stratford. They occasionally stop by at the Connecticut Audubon Society’s Birdcraft Sanctuary in Fairfield and Milford Point Coastal Center in Milford.