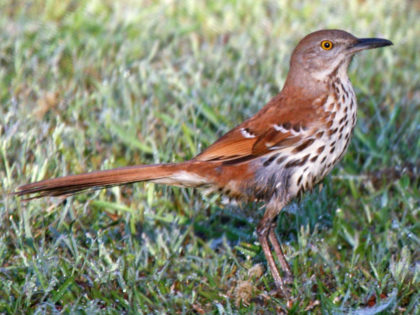 By Kathy Van Der Aue, President of the Connecticut Ornithological Society
The cinnamon-colored Brown Thrasher may more often be heard than seen as it spends much of its time hidden in its preferred shrub habitat. A little bigger than a robin, the Brown Thrasher is on the list of Connecticut’s “Birds of Special Concern,” mainly because of loss of the messy shrubby areas it favors.

Where to find it: Recent sightings have been reported at Mondo Ponds in Milford, East Rock Park in New Haven, Bantam Lake and White Memorial Foundation, both in Litchfield County, and Barn Island Wildlife Management Area, New London. You should look – and listen – for it in any shrubby thicket.

How to find it: The thrasher is in the Mimid family, meaning it is a mimic much like its local cousins the Gray Catbird and the Northern Mockingbird. Its song consists of an assortment of sounds usually given in pairs (compare with the catbird’s single repetition and the mockingbird’s several repetitions of each phrase). It can be loud and lengthy. Listen carefully and you might hear bits of other birdsong.

The male and female pair up at the beginning of the nesting season and courtship begins with the presentation of a gift to the female; a twig or a leaf, something useful for the nest building ahead of them. The pair cooperate in building the nest, which is an open cup made of grasses, twigs and dead leaves placed low to the ground in a shrub. The speckled glossy pale blue eggs are incubated by both parents for about 12 days. The young are born helpless (atricial) but are ready to leave the nest within another 12 days. The parents will often dive bomb predators that approach the nest too closely. They are the largest species whose nests are parasitized by Brown-headed Cowbirds but fortunately they usually recognize the foreign eggs and toss them out.

Before the 1970’s Brown Thrashers were among the most common of shrubland birds, found in thickets throughout the state. Their decline is linked to the regrowth of those thickets into forests, or the transformation of the thickets into lawns, with the most dramatic decline from the 1970s and ‘80.

Brown Thrashers are still here however, maintaining low numbers in the few shrubby areas still existing and those being created and maintained. It is doubtful that they will ever recover their former abundance unless the Connecticut landscape returns to old pasture and new forest.

Brown Thrashers will nest in suburban locations if we allow dense shrubby patches to remain in our yards. Because their nests are so low, their nestlings fall prey to predators like outdoor cats and raccoons and the dense vegetation helps to protect them.