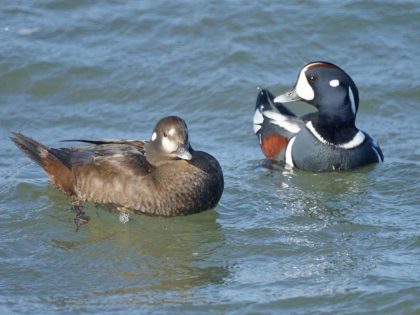 by Andy Griswold, Director of Connecticut Audubon Society’s EcoTravel Program
Taking its name from a colorfully dressed character in Commedia dell’arte and long touted to be the “fashion plate of the winter seas,” Harlequin Duck is a rare sight in Connecticut, but travelers are nearly guaranteed to see them at Sachuest Point in Rhode Island, where a large percentage of the dwindling North American population spends the winter, or over on Long Island.

There have been a number of sightings in Connecticut this winter, but none  currently. We have trips planned to look for Harlequins (and other birds) in Rhode Island and Montauk over the next several weeks and we invite you to join us. Details are below.

The adult is a medium-sized diving duck with a white patch in front of the eyes and a round white ear spot. The male’s plumage features a striking slate-blue body, large white crescent in front of the eye, and chestnut-brown flanks. The magnificent plumage, on par with the male Wood Duck, makes this a much-sought-after winter visitor. Females are dusky brown with two or three round white spots on the head.
More than half of the eastern North American population of Harlequin Duck winters along the Maine coast, but a large portion make it to rocky shores further south where you can see them diving between the rocks and crashing waves in search of fish and marine invertebrates. When nesting, the preference is for areas where there are fast moving waters, such as rocky freshwater streams.
The oldest recorded wild Harlequin Duck, a banded male, was at least 20 years and 9 months old when seen in British Columbia in 2014.
According to Cornell University, “There is little information on Harlequin Duck population numbers and trends, but wintering populations in eastern North America are currently much smaller than historical (late 1800s) numbers. However, populations grew in the last part of 20th century. The species rates an 11 out of 20 on the Continental Concern Score. Harlequin Duck is not on the 2016 State of North America’s Birds Watch List. The species is listed as endangered in Canada, threatened in Maine, and a species of special concern in western states.”
If you would like to join Connecticut Audubon Society EcoTravel to see this bird, we are offering two wonderful experiences, the first a day trip to Rhode Island on Wednesday, February 8. The second is a two night overnight tour to Montauk, from February 10 through 12.

In addition to the Harlequin Duck, Rhode Island’s coast and Montauk’s shoreline are ideal spots to look for other wintering ducks and alcids. All three scoters can be found as well as Common Eider, Long-tailed Duck, and occasionally a rarity like King Eider or Barrow’s Goldeneye. At Montauk, the most common among the alcids is the penguin of the north, the Razorbill.