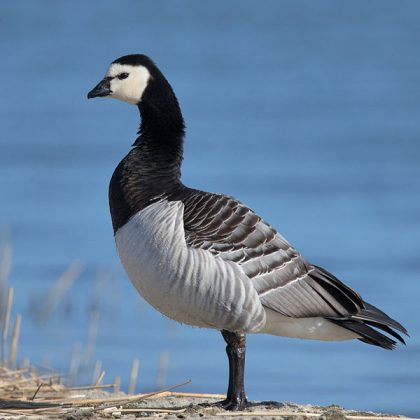 by Paul Cianfaglione
Where to find it: The Barnacle Goose is a rare species that breeds in eastern Greenland and winters in northwestern Europe. Barnacle Geese will show up occasionally in eastern North America, with the greatest number of reports coming in from Quebec.

Vagrant Barnacle Geese can also be found in Connecticut, with the most reliable location today being along the Connecticut River in Enfield, at the Donald Barnes Boat Launch on South River Street.

How to find it: This stretch of the Connecticut River offers overwintering geese two important requirements, open water and food. After spending the evening along the banks of the river, large numbers of geese will fan out from the boat launch into local farm fields to feed. Scanning the Canada Geese with a spotting scope prior to morning departure is the ideal way of finding a rare Barnacle Goose.

What it looks like: The Barnacle Goose is a medium-sized species, noticeably smaller in direct comparison to the more abundant Canada Goose. Barnacle Geese have beautiful cream-white faces that immediately stands out from its jet-black neck, crown and chest. The back and wings are grayish, with black and white bars. In flight, the belly, undertail coverts and rump are strikingly white, which contrasts significantly with its wide black tail. The bill, feet and legs are also black.

Be aware of other waterfowl species that sport white in their plumage such as the uncommon Snow Goose, and the much rarer Ross’s Goose. But the biggest identification pitfall may come from the discovery of a hybrid or leucistic Canada Goose.

Conservation status: Red List Status: LC – Least Concern. The Greenland population of Barnacle Goose has increased dramatically since 1959, from 9,000 geese to 54,000 geese in 2003.  In spite of the population increase, the Barnacle Goose remains vulnerable to human impacts because of it habit of aggregating in very few specific geographic areas during breeding, staging and wintering.