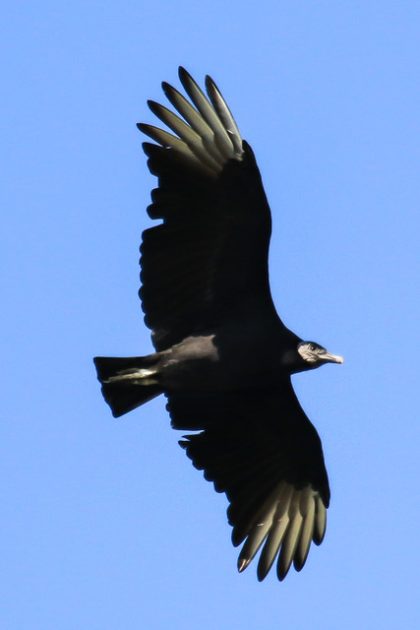 by Christopher S. Wood
Not all that long ago, Connecticut birders would form a posse to go chasing reports of Black Vultures in the state. These days the species is pretty common and can be seen almost anywhere in Connecticut at any given time, even in winter, although they appear to be slightly more common in the western part of the State and along the coast, according to eBird data.

Both Black and Turkey Vultures have benefitted from the reforestation of New England and the concomitant growth in the deer herd. With increasing natural and vehicle-induced deer mortality, plenty of vulture food is available.

What it looks like: Black Vultures are readily distinguished from Turkey Vultures at a distance by their flight pattern: wings are held horizontally rather than in a V shape and wing beats are stiff and rapid, rather than loose and leisurely.

Close up, the white-tipped wings provide a clear distinction. Closer still, a good look at the head reveals black, rather than red, skin on the face. Neither species is particularly handsome, in an “I love birds” kind of way, but they are extremely well designed for what they do, and we all benefit from their waste management lifestyle. 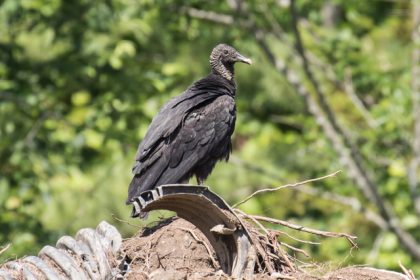 Status: Birds of Connecticut (Sage, Bishop, and Bliss, 1913) noted only two Black Vulture records, one from 1901 and one from 1879. The Atlas of Breeding Birds in Connecticut (1994) includes no reports of potential breeding Black Vultures. Connecticut Birds (Zeranski and Baptist,1990) reported that BVs were “very rare visitors from the south, but increasing.”

And increase they have, in Connecticut and the Northeast.

In December 1995 I photographed no fewer than 15 BVs on a cow carcass at Sunny Valley Farm in New Milford, probably the highest single count for that bird in Connecticut up to that time.

Black Vultures have suffered from persecution as a perceived risk to livestock, disturbance of nesting habitat, and pesticide poisoning. However, the population today across their entire range appears healthy and growing.

Where to find them: As noted, BVs can be found almost anywhere but, like all vultures, they search for food over open areas, usually soaring above TVs (see below). Any active landfill site will attract vultures, but you are most likely to see them along highways seeking, or eating, roadkill.

Today, one of the most reliable spots to see BVs is at the intersection of Route 7 and Route 84 in Danbury, where the Connecticut Department of Transportation maintains a road kill dump site. You can see them perched on trees and billboards from the highways but the parking lot of the nearby Lowes provides a good, safe place for more relaxed observation.

Interesting Facts: Unlike Turkey Vultures, Black Vultures do not have a strong sense of smell (although they themselves smell pretty bad). In fact, they monitor Turkey Vulture activity by flying higher than that species and following them to carrion supplies, often displacing the TVs once they arrive in numbers.

Vultures practice urohidrosis, which is defecating on the legs as cooling mechanism. Because of that, U.S. Fish and Wildlife prohibits leg banding, which could result in ulceration due to fecal matter build-up under bands (from The Birds of North America: Cornell Lab of Ornithology)

All in all, despite its less than appealing appearance and habits, the Black Vulture is a remarkable and ecologically important bird.