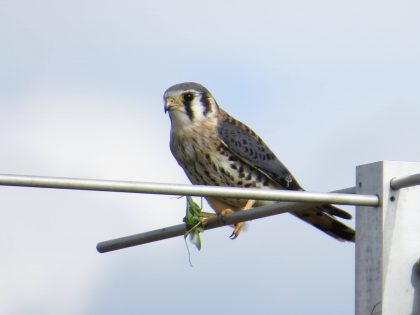 By Genevieve Nuttall
You may spot an American Kestrel in Connecticut this fall either on its southward migration route or in its year-round home. The American Kestrel is a small, colorful falcon that hunts rodents, insects, and songbirds.

What it looks like: Unlike many raptors, the American Kestrel has vivid plumage coloration. The breast is pale, lined with dark spots. The back is brown with more spots, with males having grayish-blue wings and females having reddish wings. The tail for both sexes is a rusty color, and all individuals have thick black lines coming downward from their eyes.

The body shape and size of an American Kestrel is similar to a Mourning Dove (Zenaida macroura) which can make identification challenging. When in flight, look for smooth movement through the air or hovering in the air over a field. These characteristics are distinct from a Mourning Dove, which has a rapid and even flight pattern.

Where to find it: During migration – in other words, now – you may be able to spot more American Kestrels than during other times of the year. Try searching along stopover coastal areas for kestrels on their way south. Stop in at one of the regular hawk watching spots, such as Lighthouse Point Park, in New Haven. Tune your ears to the sounds of klee-klee-klee or chattering noises in an open field to spot your American Kestrel.

Year-round, you can find the American Kestrel in open fields lined by fences or telephone wires. These birds like to hunt in meadows and grasslands, and they can be spotted by their hovering behavior before striking a prey. During the breeding season, you will see them nesting in old tree cavities or nest boxes.

American Kestrels nest at the Bafflin Sanctuary at Connecticut Audubon’s Center at Pomfret and were seen there this week.

Interesting Facts: Kestrels, like all birds, see ultraviolet light. They can visualize the ultraviolet urine trails from moles, which the prey on. This ability to clearly see urine trails helps them track down and capture their prey. Though these raptors are small, their hunting techniques are as fierce as any other falcon!

Conservation Status: The American Kestrel is considered a species of Special Concern in Connecticut but of Least Concern throughout its range. Nevertheless, populations have declined almost 50% between the 1960s and 2015. The decline is largely due to the unavailability of nesting habitats. When trees are cleared to create farmland, kestrels lose their nesting cavities and the prey that lived in that habitat.

Despite this large decrease in the population, American Kestrels are persistent and remain as the most common falcon in North America. You can help this species by constructing wooden nest boxes near open fields that will provide good hunting and nesting habitat.