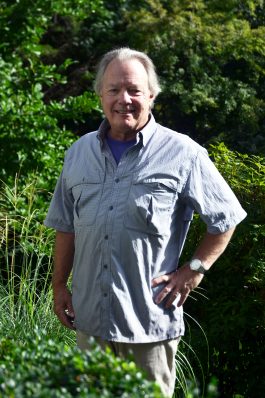 The Connecticut Audubon Society presented longtime Board member D.G. Warner of Southport with its Dave Engelman Volunteer Benchmark Award, at its annual meeting on Sunday, Oct. 15 in Sherman.

He was one of four honorees this year.

D.G. joined Connecticut Audubon’s Board of Directors in 2007 and continued through this year, serving as vice chairman, treasurer, and chairman of the investment and finance committees. He also served for more than a decade on the organization’s Fairfield Board of Governors.

“D.G. has served in positions that require daily diligence,” Patrick M. Comins, executive director of Connecticut Audubon, said at the meeting, which was held at the organization’s Deer Pond Farm sanctuary. “It has paid off in recent progress toward financial sustainability. He has brought an outstanding ability to visualize trends and explain them in easily understandable terms.”

Connecticut Audubon Society’s Volunteer Benchmark Award was established in 1993, and is given annually by its Board of Directors to one or more individuals whose volunteer activity has significantly enhanced the organization’s mission.

Each year, at the annual meeting, recipients are presented with a plaque commemorating their dedication to conservation. The other 2017 recipients are Dan Miller of Manchester, Louise Crocco of Milford, and Richard Telford of Pomfret.

In 2007, the award was renamed the Dave Engelman Volunteer Benchmark Award for a longtime member, donor, board member, and one-time interim president. Engelman epitomized the characteristics of an extraordinary volunteer by helping Connecticut Audubon Society grow both in spirit and as an organization.